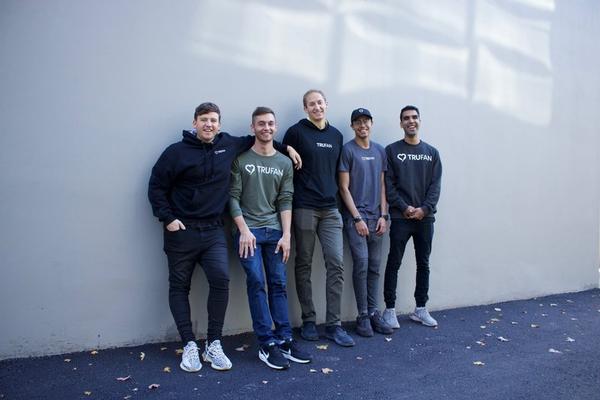 Trufan is a tech startup working out of Hootsuite in Vancouver. (CNW Group/Trufan Inc.)

Vancouver, BC, November 19, 2018--(T-Net)--Trufan, a Vancouver-based SaaS company that helps influencers and brands identify and reward their top fans, announced today that they have raised $500,000 from several angel investors to fuel the launch of its web platform and expansion to markets across Canada and the United States.

The company's web platform, which will be entering private beta on November 15, uses a proprietary algorithm to determine a user's top influential and engaged followers on Twitter.

Trufan users can use the platform to directly message and reward their top followers, segment them using various filters and export their followers into a CSV file that can be used for retargeting campaigns on Twitter. This direct channel can help users sell to their top fans, set up local events, build influencer lists, structure retargeting campaigns, and most importantly, build a loyal community.

On Trufan, she said "From a brand perspective I am very excited about the potential that Trufan offers. Many brands are still trying to understand the opportunity around influencer marketing and how to align different kinds of influencers around brand values and purpose. Trufan will enable brands to leverage the highly valuable intersection between influencers and their most engaged fans in a unique way... to understand consumers better, gain insights, drive offers in a direct and personalized at scale approach."

For Swish and Aanikh, they see their work at Trufan as not only a way to advance the field of marketing but entrepreneurship as a whole in Canada.

On that, Swish said "Many cities don't do the best job of profiling some of the incredible companies that have been born on Canadian soil. We want to let people know that it's never been better to build a company in Canada."

Trufan's team of seven will be going through Hootsuite CEO Ryan Holmes' national incubator The League of Innovators (LOI) that hopes to spread access to entrepreneurship across Canada.

Swish is on the board for LOI and was incredibly grateful to them saying "We're genuinely thankful to LOI and Ryan for giving Trufan office space at Hootsuite and for giving us a platform to spread our passion for solving problems." Trufan will be also be producing content with LOI and K-Swiss, with a plan to release a podcast where celebrities are interviewed by their top fans and a web series that shows the behind the scenes of growing a startup from the ground up.