BC Receives an 'A' in the 2018 KPMG Technology Report Card 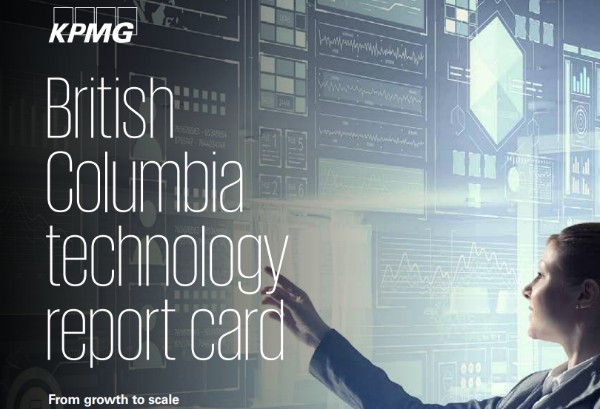 The report rates the tech sector's performance in the provincial and global economies, as well as its potential to grow.

"I'm proud to see BC's tech sector get a third straight A on economic outputs," said Jill Tipping, President and CEO of BC Tech. "What an outstanding achievement for our industry and our community! To realize our full potential, let's now turn that energy to growing our talent pool and supporting more BC tech companies to achieve scale-up success. Strong anchor tech companies at the heart of our ecosystem are extremely important to enrich the talent pool, create spinoffs, and provide proven pathways to scale."

"This strong A-grade shows that tech companies continue to create good jobs throughout our province," said Bruce Ralston, Minister of Jobs, Trade and Technology. "A strong economy needs thriving industries, and our government is committed to the tech sector's continued success in all areas, particularly the natural resource sector. This includes increasing talent development so that we have a well-educated and diverse work force that can support the province's innovation and growth."

With top performance indicators and consistent growth, the industry's momentum is picking up — and not just in Vancouver. There is exciting regional growth across the Province. "The Okanagan tech sector has grown 15% each year since 2013, and we're now home to almost 700 technology companies," said Raghwa Gopal, CEO of Accelerate Okanagan. "This report card has lots of good news for BC."

Dan Gunn, Executive Director of VIATEC (Victoria Innovation, Advanced Technology and Entrepreneurship Council), agrees. "Victoria's tech sector has increased its annual economic impact from its 955 tech companies to $5.22 billion and it's exciting to see just how much progress the BC Tech ecosystem has made since the last KPMG report card in 2016," said Gunn. "I'm proud to see Victoria leveraging their ideas, community and hustle to earn the province an A on economic performance."

Some challenges for the BC tech sector were clear in the KPMG report card on input indicators, which received a B-, consistent with the 2016 report.

Provincewide, leaders in tech and government see a need to build on our strengths, invest in our people and push forward. It is necessary to build the sectors' momentum and work to identify solutions to challenges through collaboration with public policy leaders and educational institutions.

Jameel Ahamed, Partner, Consulting and BC Lead, Digital Transformation and Innovation at KPMG, agrees. "From our discussions with senior leaders at the helm of BC-based technology firms, there is a clear need for even more anchor technology companies that call BC home. Companies that will form the backbone of a vibrant tech community," said Ahamed.

"The opportunity is here, and it is our collective responsibility to come together to realize it and take our rapidly growing tech sector to the next level."

Making BC the best place to grow and scale a tech company has been the mission of the BC Tech Association since 1993. While our members focus on growing their businesses, BC Tech has been providing opportunities for our industry members to collaborate, learn, and grow together. We are dedicated to connecting companies, developing talent and advancing solutions so that our industry and our province thrive. To learn more visit www.wearebctech.com.

KPMG LLP, an Audit, Tax and Advisory firm is a limited liability partnership, established under the laws of Ontario, and the Canadian member firm of KPMG International Cooperative ("KPMG International"). KPMG has over 7,000 professionals/employees in 38 locations across Canada serving private and public sector clients. The independent member firms of the KPMG network are affiliated with KPMG International, a Swiss entity. Each KPMG firm is a legally distinct and separate entity, and describes itself as such. To learn more visit kpmg.ca.