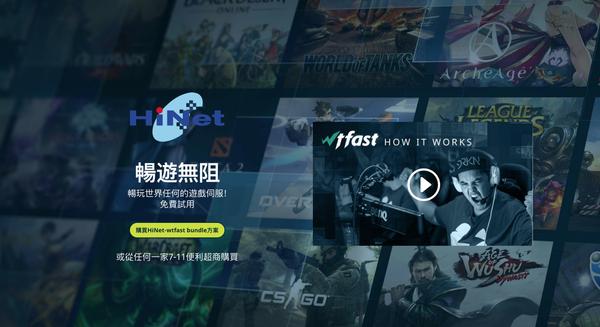 Starting this month, wtfast will provide HiNet subscribers in Taiwan with its patented solution for reducing lag and smoothing connections to popular game servers.

Founded in 2009 and active in more than 100 countries, wtfast is designed exclusively to provide a more direct connection to servers for the most latency-sensitive applications: massively multiplayer online games (MMOGs). With four patents granted and partners including ASUS, MSI, Linksys and Gigabyte, wtfast protects against packet loss and improves ping times, saving seconds, which can mean the difference between winning and losing in the gaming world.

With a population of 12.8 million gamers, Taiwan is the 15th largest games market in the world. The HiNet Gaming Booster bundle will incorporate wtfast's premium game network optimization tool into the HiNet suite of value-added internet services.

"We are very excited to bundle wtfast with HiNet's game booster service to support the large gaming population in Taiwan. We are expecting the service to increase our subscribers and improve our customer loyalty," said Eric Chie of HiNet.

"We are honored to be working with the team at Chunghwa Telecom to bring our technology to HiNet customers," said Rob Bartlett, CEO of wtfast. "With the wtfast/HiNet Game Booster service, we give gamers the competitive edge, with upwards of a 60% overall network improvement. This gives gamers a much smoother connection and reduced ping time to their favorite game servers, which can mean the difference between winning and losing their game!"

wtfast is the Gamers Private Network (GPN) — a global network built exclusively for the transmission and delivery of online game data. Launched in 2010, the wtfast GPN is designed for the global online gaming and esports market, which is projected to reach $108.9 billion USD in revenue by the end of 2017. With partners including ASUS, MSI, and Gigabyte, and advisors including Nolan Bushnell (Atari), Emil Mouhanna (Akamai), Jens Hilgers (ESL/BITKRAFT), and Dima Polyak (Riot Games, Super League Gaming), wtfast is committed to providing the best connection for gamers worldwide. To learn more about wtfast, visit our website or contact us at media@wtfast.com. https://www.wtfast.com

Chunghwa Telecom (CHT) is the number one telecommunication company in Taiwan. Data communications and value-added services are CHT's two main areas of operations. With its excellent broadband network, online value-added and digital content services, CHT-D is the biggest Internet service provider in Taiwan, and HiNet has been the brand name for our pioneering Internet services since 1994 with 4 million home internet subscribers across Taiwan.