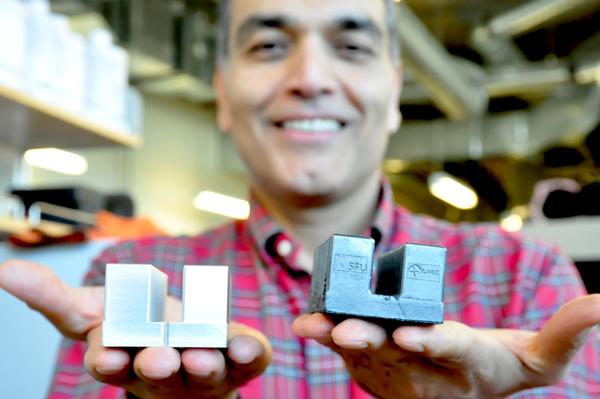 One key to their efforts is using graphite, a material with superior qualities in terms of thermal control and cost effectiveness.

"A major challenge to efficiently cooling components, which is critical for the reliable function of the power electronics, is the packed arrangement of components and limited available surface area for heat transfer," says Majid Bahrami, a professor in SFU's School of Mechatronic Systems Engineering (MSE).

The researchers are using sophisticated graphite sheets to enhance thermal performance, eliminate parasitic cooling power and decrease electromagnetic interference. Parasitic cooling power is the power that fans, pumps and other cooling devices consume to cool down the device (and can eat up as much as 15 per cent of the total energy usage of the device).

Passive cooling involves natural cooling mechanisms, such as free convection and radiation heat transfer, and is greener, more reliable (no parts that can break down), and quiet.

Graphite has superior thermo-mechanical properties, including heat removal capacity. It's also lightweight and corrosion resistant, making it excellent for the thermal management of power electronics and the auto industry, Bahrami notes.

"Enhanced cooling by compact, light, and cost-effective heat removal systems is essential to the competitiveness of high-performance power electronics systems in the market," he says. "It's also desirable to replace the parasitic power consumption of fans with passively-cooled systems, which significantly improves efficiency, reliability (no fan failure) and reduces noise."

Bahrami, who holds a Canada Research Chair in Alternative Energy Conversion Systems, recently received an Innovate BC award of $300,000 to further his collaborations with Burnaby-based Delta-Q Technologies and Terrella Energy Systems of Mission to develop and commercialize the high-capacity chargers.

Canada is the fourth largest exporter of raw graphite. The proposed graphite products are aimed at the strategic $17 billion/year industrial heat exchangers and a $12 billion/year thermal management products markets, and according to Bahrami, have the potential to revolutionize the industry.

Bahrami's research is among four projects to share nearly $1 million through Innovate BC's Ignite program, which funds technologies that solve problems within the natural resources and applied sciences industries.

Earlier this year the federal government earmarked $2.3 million for Ionomr as part of a $26.3 million investment in four cleantech companies focused on protecting the environment.

Known as the Molecular Delivery System (MDS), their breakthrough technology increases the oils' effectiveness and enables these environmentally friendly pesticides to outperform their synthetic chemical counterparts.