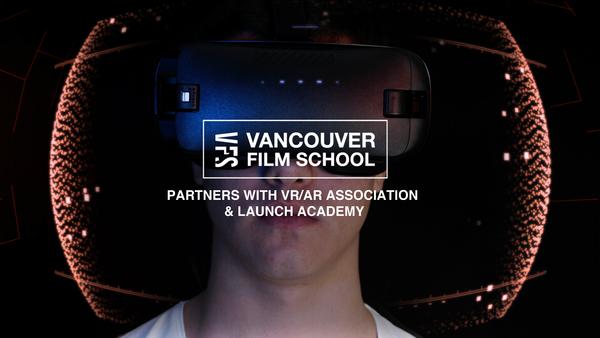 These leading-edge organizations are devoted to cultivating up-and-coming talent in the VR/AR industry and will collaborate on sourcing industry partners and mentors to assist students with VR/AR projects across a broad spectrum of industries and applications, including: health care, manufacturing, architecture, travel/tourism, education, aerospace, and other sectors of enterprise demanding VR/AR solutions.

"Vancouver is at the centre of a booming VR/AR ecosystem that is only getting bigger. As an industry we need to keep the momentum going and part of that is developing top talent. The VR/AR program at VFS will help create the next wave of innovators for the future. " said Dan Burgar, Vancouver Chapter President, VR/AR Association.

"The Launch Academy Team is really excited to partner with VFS and help contribute to the VR/AR Design & Development Program. The opportunities in the VR/AR industry are significant and we have a chance to position Vancouver as a global leader. We are really looking forward to connecting VR/AR companies to top quality talent graduating from VFS and also helping the entrepreneurial minded VFS students with the execution on their own VR/AR startups. " stated Ray Walia, CEO & Co-Founder, LAUNCH ACADEMY.

In 1987, VFS revolutionized entertainment arts education with the introduction of the world's first one-year intensive film production diploma program. Today, VFS is Canada's premier post-secondary entertainment arts institution, offering acclaimed and award-winning one-year diploma programs in 3D animation, film, TV, programming, video game, motion and interactive design. For the past 30 years, VFS has been devoted to delivering the highest quality education, and developing the next generation of leaders in the entertainment and creative media industries.

About the VR/AR Association

The VR/AR Association (VRARA) is an international organization designed to foster collaboration between innovative companies and people in the VR and AR ecosystem that accelerates growth, fosters research and education, helps develop industry standards, connects member organizations and promotes the services of member companies. For more information, visit: http://thevrara.com and http://vraravan.com

Launch Academy is an early-stage tech incubator that provides entrepreneurs with the mentorship, resources, network and environment they need to launch, fund and grow their startups. Since 2012, Launch Academy has incubated over 600 companies that have collectively raised over $150 million and created more than 1250 jobs. As a nonprofit leader that's focused on community impact, Launch Academy aims to train and support more than 100,000 entrepreneurs by 2025.