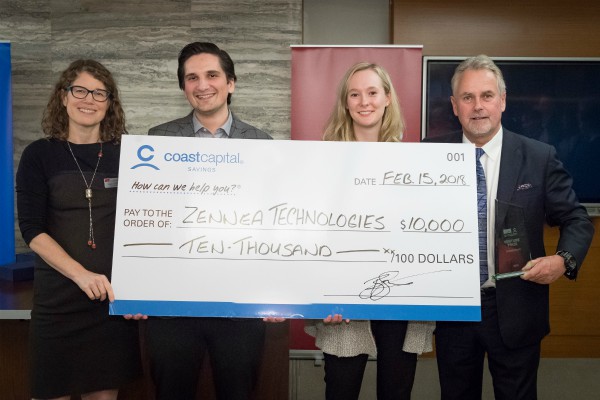 "We value the mentorship, friendship and support we've received as a part of Venture Connection. It's an amazing community that deserves much of the credit for our victory."

The team of MSE and business students, part of the Technology Entrepreneurship at SFU program, is working to create 'sleep wearables,' including a smaller, portable battery-operated alternative to the large CPAP machines for those who have sleep apnea. They also hope their product will reduce snoring, track the quality of sleep, and help improve overall health.

The Venture Prize, presented by the Coast Capital Savings Venture Connection program at SFU, is in its seventh year of celebrating entrepreneurial excellence at the university.

Following on preliminary rounds, entrepreneurs from the SFU community pitched their start-up ventures in a final dragon's den-style event in hopes of winning the Top Venture Prize award or one of several other category and attribute prizes.

Additional prizes reward ventures in the idea stage, those founded by women and SFU alumni, and those focused on social impact. New this year is the Penguin Pivot prize, awarded to teams who take daring risks and pivot when they realize their venture is best suited for something new.

In total, a record $40,000+ in cash and more than $35,000 of 'in-kind' prizes were up for grabs at last week's final competition. The finals were hosted downtown at the law firm of Borden Ladner Gervais LLP. BLG is also one of the event sponsors, joined by PwC, SFU Innovates, Charles Chang Institute for Entrepreneurship, SFU Alumni Association, SFU's Industry Engagement Office, SAGE Accounting, RADIUS SFU, Bucketlist, Futurpreneur and New Ventures BC.

Among the other winners are:

Top Small Business award: Mr. Arancinco: Mr. Arancino's risotto balls, called arancini, are an innovative take on a traditional Sicilian recipe. Mr. Arancino's food trailer can be found around Downtown Vancouver or parked at one of the four breweries down 'Brewer's Row' in Port Moody.

Penguin Pivot Prize: Piva Concepts: Piva Concepts is an ancillary value-added company that creates turn-key cannabis edibles product lines, which are then packaged and taken on by licensed producers to be manufactured and sold legally.

While the Venture Prize has been recognizing entrepreneurial excellence at SFU for seven years, Coast Capital Savings has been supporting Venture Connection since 2008.

"Our partnership with SFU aligns with our promise to help build a richer future for youth in our communities," says Bruce Schouten, interim President and CEO, Coast Capital Savings. "Some of the world's most important breakthroughs have come from youth, right here in Canada. This year's participants impressed us with their passion and ingenuity, and that is why Coast Capital continues to be involved in this important program that empowers youth to be curious, to innovate and to follow their instincts. On behalf of Coast Capital Savings, I would like to congratulate Zennea Technologies on their win, and congratulations to all of this year's participants."

Joy Johnson, SFU's Vice-President, Research and International, says, "SFU Innovates is a university-wide strategy that seeks to strengthen SFU's commitment to innovation and entrepreneurship. As one of SFU Innovates' programs, Coast Capital Savings Venture Connection delivers on this commitment by providing students the support needed to move their ideas into action. On behalf of the SFU community, I would like to congratulate this year's applicants and award winners."

Coast Capital Savings is Canada's largest credit union by membership with over $20 billion in assets under administration. An Imagine Canada Caring Company, the credit union invested $5.6 million into local communities in 2017, focusing on empowering and engaging youth. Named a BC Top Employer in 2017, Coast Capital is also a member of Canada's Best Managed Companies Platinum Club. It has 52 branches serving its 555,000 members in the Metro Vancouver, Fraser Valley, Vancouver Island and Okanagan regions of British Columbia. Product innovations include Canada's first free chequing account from a full-service financial institution. To learn more, visit coastcapitalsavings.com.