UBC Study Says Toddlers Getting Screen Time, Despite Guidelines to the Contrary 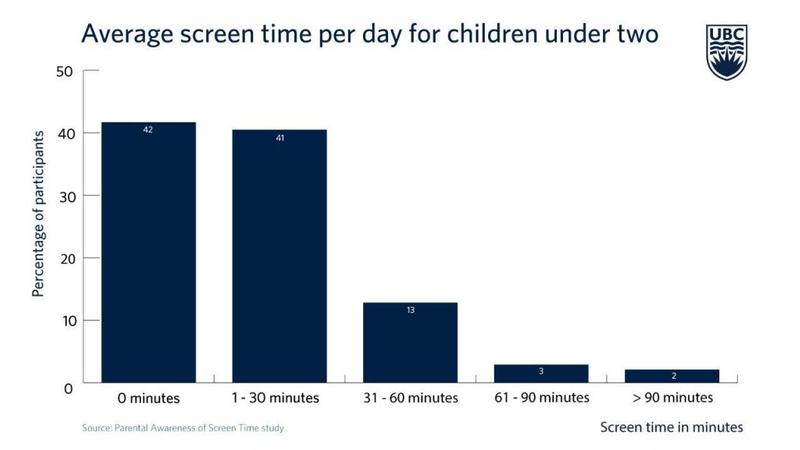 Vancouver, BC, March 2, 2018--(T-Net)--More than half of Vancouver parents surveyed in a new study reported allowing their children to use electronic devices like smartphones and tablets, despite guidelines from the Canadian Pediatric Society recommending against screen time for children aged two and under.

A team of nurses, mentored by UBC nursing professor Wendy Hall, surveyed 242 parents of children under two years of age at community health centres throughout Vancouver.

While a large proportion (42 per cent) of them said they did not allow their children any screen time, an almost equal amount (40.5 per cent) allowed up to 30 minutes per day, and the remaining 17.5 per cent gave them an hour or more per day.

"We noticed in our practice that we were seeing a lot of use of screens in younger kids," said Reda Wilkes, study co-author and a public health nurse with Vancouver Coastal Health. "During vaccination clinics, instead of holding their child and cuddling them when they got pain after a shot, they would be flashing their smartphone in front of them to try and distract them with a video."

"We can sugarcoat it all we want, but screens are not recommended, and at a young age it's not good for them," said Wilkes. "There's nothing to support it. Young kids are supposed to be constantly moving and when you put them in front of the TV, that just stops."

Hall said she was not surprised by the survey's results. "It's unsurprising that parents use screens to distract children so they can get chores done and try to balance work and family life," she said. "Nevertheless, we need to help parents appreciate that screen time can not only have negative effects on children's language development, but it also interferes with children getting adequate amounts of sleep, even if the screens are not part of the bedtime routine."

To obtain a copy of the results or schedule interviews with the researchers, contact lou.bosshart@ubc.ca