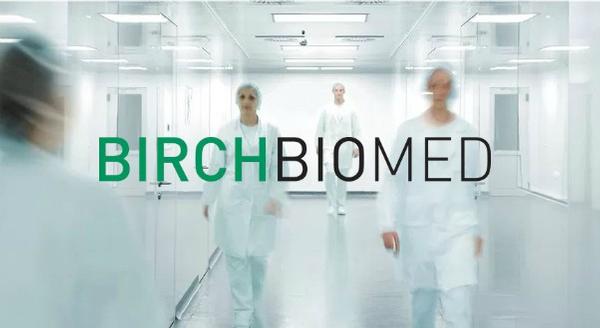 BirchBioMed Inc. is exclusively licensed by the University of British Columbia to develop anti-scarring drugs and autoimmune therapies based on its leading drug candidate, FS2

Vancouver, BC, March 20, 2018--(T-Net)--BirchBioMed Inc., a biomedical company focused on the commercialization, clinical evaluation and development of proprietary anti-scarring drugs, autoimmune therapeutics/therapies and novel strategies for transplantation, has been cleared by Health Canada to begin a phase II clinical trial of FS2, a unique and ground-breaking treatment developed by University of British Columbia (UBC) researchers to prevent scarring and breakdown existing scars.

Dr. Anthony Papp, M.D. Ph.D., a world-renowned surgeon/clinician and leading authority on burn trauma and scarring, will be the Principle Investigator for the 55-patient study.

"As a burn surgeon, I see the horrific effects of scarring every day," said Dr. Papp. "This first phase II study is an important, major milestone in the treatment of scarring, as there is no therapeutic on the market today that has shown the unequivocal results that FS2 has demonstrated in robust pre-clinical scar models."

BirchBioMed's phase II trial achieves a significant milestone, as the first opportunity for FS2 to make a difference in the lives of burn and trauma patients, who until now have been unable to mitigate the devastating effects of the scars they sustain.

The phase II trial will investigate the effectiveness of FS2 in preventing post-surgical scar formation. Results of the phase I study, led by Dr. Papp and researchers at UBC, were published this month in the Journal Pharmaceutical Sciences.

"Health Canada's approval to begin phase II clinical trials is a vital step in BirchBioMed's efforts to change the way medical science treats the millions of people who sustain disfiguring and often life-threatening scars every day," said Mark Miller, BirchBioMed's Chairman and Chief Executive Officer. "FS2 is the first of its kind treatment for all forms of scarring, and it holds the potential of saving billions of dollars by changing therapeutic protocols and establishing a new state-of-the-art treatment for burns and wounds."

Discovered by UBC Professor of Surgery Dr. Aziz Ghahary, one of the world's leading authorities on wounds and scar research, and his team, including Dr. Ryan Hartwell, co-founder of the FS2 technology and Chief Science Officer of BirchBioMed, these technologies are being viewed as important breakthroughs that have the potential to impact millions of people worldwide.

In respect to scarring, Dr. Ghahary, who also serves as the director of the British Columbia Firefighters Burn and Wound Healing Laboratory, part of the Vancouver Coastal Health Research Institute (VCHRI), said: "Until now there has yet to be a single therapeutic that can target the molecular aspects of scarring, which result from the body over-repairing after an injury, surgery or disease."

The phase II trial will be conducted in Vancouver, BC, through VCHRI and UBC. Unlike any other clinical scar study, BirchBioMed's phase II trial intends to mitigate post-surgical scar formation in patients who have recently received skin-grafting procedures to repair their wounds. A skin-grafting procedure involves the removal of skin from one area of the body and transplanting it to a wound that, because of its severity, will have difficulty healing.

BirchBioMed's CSO, Dr. Ryan Hartwell, said: "Approaches to radically reduce costs and improve treatment outcome for burn survivors and others debilitated by scars have been historically challenging, fueling the excitement and promise around our unique discoveries that for the first time address the build-up of scar protein, regardless of etiology."

Brad Wheeler, UBC's Technology Transfer Manager, said: "We are very pleased to see Health Canada's approval of BirchBioMed's phase II trials, especially considering that FS2 is the most clinically ready UBC therapeutic to be transferred to industry to date."

BirchBioMed's UBC-licensed therapeutics have benefitted from approximately $6 million in grants and donations from the Canadian government, Insurance Boards, and leading foundations, including the Canadian Institutes of Health Research Proof-of-Principal Program, the National Science and Research Council, WorkSafe BC, the BC Professional Fire Fighters Burn Fund, the JDRF (formerly the Juvenile Diabetes Research Foundation) and The National Alopecia Areata Foundation (NAAF).

It is also the first technology that UBC, or any other Canadian academic institution, has advanced from the discovery stage through phase I clinical trials with support strictly from government and private donations. This achievement is an index of this technology's potential importance and impact on society.

To date, BirchBioMed has raised approximately $3 million in capital investment, surpassing a major milestone requirement in its licensing agreement with UBC by raising more than $1 million (USD) in seed capital within 12 months of the license agreement's start date on June 10, 2016.

Both UBC and the VCHRI will receive up to $220 million in milestone payments based on clinical development and sales performance, as well as royalties based on BirchBioMed's worldwide sales of the therapies.

BirchBioMed Inc. is a biomedical company focused on the commercialization, clinical evaluation and development of proprietary anti -scarring drugs, autoimmune therapeutics/therapies and novel strategies for transplantation. As a University of British Columbia (UBC) spinoff, BirchBioMed holds the exclusive, worldwide pharmaceutical license for two of UBC's most highly regarded therapeutics, which the university considers to be major medical breakthroughs in the treatment of scarring and certain autoimmune diseases, including type 1 diabetes and alopecia. To learn more about BirchBioMed Inc., visit www.birchbiomed.com

About the University of British Columbia

The University of British Columbia is one of Canada's top academic institutions and the birth place of more than 160 start-ups, including companies such as QLT. BirchBioMed's licence was granted through UBC's University-Industry Liaison Office. BirchBioMed is the 86th life science spin-off company from the university.