The investment is led by Andreessen Horowitz and Union Square Ventures, two of the world's top venture capital firms who have also backed companies like Facebook, Twitter, and Coinbase.

Other angel investors and seed funds participating in the financing include:

"If you've missed the CryptoKitty mania, it's a game that lets users breed, raise and trade digital kitties. Each kitty is created on the distributed ledger and has a unique genome that defines its appearance and traits ("cattributes"). Each CryptoKitty is a unique object on the Ethereum blockchain, and can be bought or sold on the game's marketplace. At one point, CryptoKitties accounted for nearly 30% of all transactions on Ethereum", stated Boris Wertz of Version One Ventures in a related blog announcement.

CryptoKitties is a blockchain-based virtual game that was a breakout success on the Ethereum network, and is now being spun off by Azion Zen (a Vancouver-based venture studio) as a separate venture.

Boris Wertz of Vancouver-based Version One Ventures (one of the participating investors) stated in a related blog announcement that:

"There are three things that got us really excited about CryptoKitties. First, it's native to the blockchain. Crypto Collectibles is a powerful up-and-coming use case for blockchain. With CryptoKitties, people can create and purchase one-of-a-kind works of art thanks blockchain technology.

Another thing that drew us to CryptoKitties is that the team has taken an incredibly thoughtful approach to building products that put the user at the center, and thinking about what ownership and decentralization mean in the digital/crypto age.

And lastly, CryptoKitties is powered by a rockstar team: Roham Gharegozlou, Mack Flavelle, Dieter Shirley, and Mik Naayem. They represent some of the best talent in the crypto space right now, combining product, blockchain/ crypto, and business building talents".

"We envision a world of play, one without limits. Where ownership is real, and the things you create and discover, you can keep forever. Where games can be entire economies, unlocking mutual incentives for players and builders to extend the gaming experience. Where the world is built by everyone who chooses to be a part of it — especially you. The future is meow." stated the company in its original tongue and cheek announcement.

"The future is meow," the company concluded. 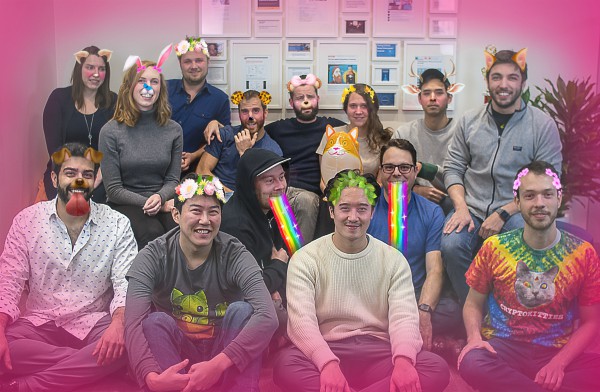 CryptoKitties are collectible and breedable digital cats. It's the world's first game built on the Ethereum network. When two CryptoKitties breed, their offspring's appearance and cattributes are determined by each parent's 256-bit genome and an element of chance, leading to 4-billion possible genetic variations.

CryptoKitties was created to explore the concept of digital scarcity, implement a non-fungible token within smart contracts ERC #721, and make blockchain technology accessible to everyday consumers.

The CryptoKitties team includes over a dozen startup founders, crypto-enthusiasts, and award-winning developers. While premiering the CryptoKitties alpha at ETHWaterloo, the team won the world's largest Ethereum hackathon with their project.

CryptoKitties was created by Axiom Zen.