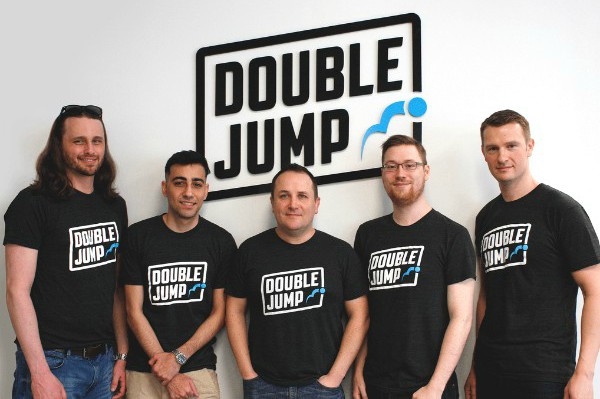 DoubleJump Doubles Its Mobile Portfolio With Acquisition of TinyMob Games

The acquisition will strengthen DoubleJump's mobile game portfolio and team with the addition of TinyMob's successful mobile games including the award-winning Tiny Realms, a strategy game set in a rich immersive fantasy world, and MERC, a tactical squad-based game set in a near-future dystopia.

The TinyMob Games team consists of industry veterans from studios including Electronic Arts, Disney and MicroProse with strong backgrounds in strategy and multiplayer games. TinyMob co-founders Alex Mendelev and Jamie Toghill will take on executive positions at DoubleJump.

"Bringing TinyMob Games under the DoubleJump umbrella adds a strong building block to our mission of building generation-defining games. We're pleased to welcome Alex and Jamie to the company to bolster our leadership team." - says Masoud Nassaji, CEO of DoubleJump Games.

"I am thrilled for the future of our company," said Ian Stapleton (SSundee), co-founder of DoubleJump Games and a gaming YouTuber with over 8 million subscribers. "We're very excited to accelerate the execution of our influencer strategy and bring amazing games to new audiences."

"What's truly compelling about DoubleJump is their refreshingly innovative approach to game distribution," says Mendelev, CEO of TinyMob Games. "We saw a unique opportunity to marry TinyMob's game development expertise with DoubleJump's strengths. We are very proud of what TinyMob has accomplished."

TinyMob's first game, Tiny Realms (pictured above) was published in 2014 and has been played over ten million times worldwide. Tiny Realms was awarded a coveted Pocket Gamer Gold Award, was a Finalist in Strategy Game of the Year 2015, and achieved a 9/10 Pocket Gamer Rating. Fans and critics fell in love with the game's deep, tactical gameplay, multiplayer battles, and weekly tournaments.

DoubleJump are the creators of Slash Mobs, a mobile role-playing game; action game, Grappling Garry and mobile platformer, Temple Toad. The games company is looking to further grow their portfolio and are looking at future acquisitions and publishing to assist other game developers with strategic distribution.

"Following this deal, we are excited to focus on plans for future growth, including the growth of both the company and its portfolio. We are looking to help other games studios with strategic distribution and look forward to introducing high-calibre games to millions of new players around the world." says Masoud Nassaji.

Founded in 2014 DoubleJump is an independent, and growing Canadian game studio based out of Victoria, British Columbia, Canada.

Generation-defining games are few and far between. We have shaped our entire organization in a manner that we think will allow us to create games of that caliber. We do not follow trends or emulate what others have done. We have a flat and open corporate structure that promotes the sharing and exploration of new, innovative and creative ideas.

TinyMob Games was founded in September, 2013 in Victoria, British Columbia. We may be young, but we're growing fast and we want you to be part of our future. Together we'll become the leading maker of free-to-play strategy games on mobile devices by creating the kind of games that you want to play. We're talking about games with rich, immersive worlds that you can explore and influence with every move. Games that challenge you, entertain you, and keep you coming back for more. These are the kinds of games we dream of creating, and we need your help to turn them into a reality.