Vancouver, AB, April 18, 2018--(T-Net)--2018 had a rousing start with US$49.3 billion of venture capital investment raised across 2,661 deals in Q1, just shy of the global record for a single quarter, according to Venture Pulse Q1 2018, a quarterly report on global VC trends published by KPMG Enterprise.

A record-breaking $29.4 billion of investment in the Americas - including $28.2 billion in the US alone - combined with high investment in Asia helped fuel the strong VC market.

"Venture capital investors continue to pour money into late-stage companies, in part because of the number of aging unicorns that have remained private," said Brian Hughes, National Co-Lead Partner, KPMG Venture Capital Practice, and a partner for KPMG in the US. "With strong IPO exits by Dropbox and Zscaler this quarter, and an increase in the number of IPO filings, we could see the tide turning over the next few quarters, bringing with it a resurgence in early stage deals activity." 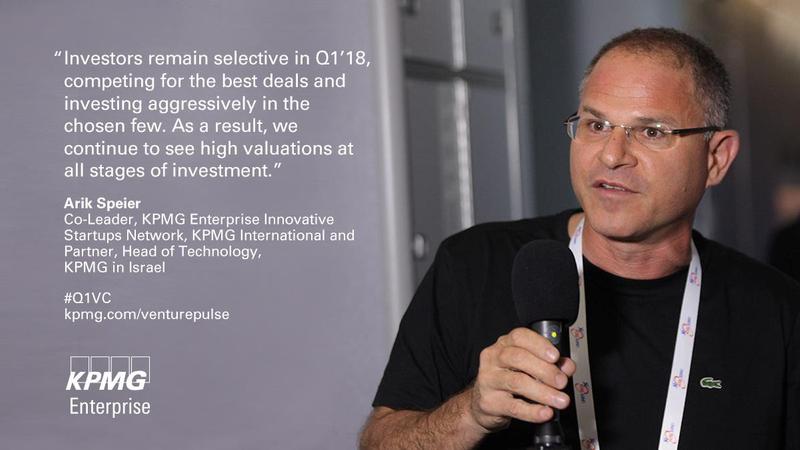 US sees record VC investment in Q1'18, propelling the Americas to strong results

The US saw a record-setting level of VC investment in Q1'18, with $28.2 billion invested across 1,693 deals. In addition to the three $1 billion+ megadeals seen in the US, a bevy of $100 million+ deals helped propel VC investment to a new high. In addition to transportation and autotech, biotech was a big winner in the US this quarter, with large raises by Moderna Therapeutics ($500 million), Harmony Biosciences ($295 million), and Viela Bio ($282 million).

Across the Americas, Canada matched its second-best quarter of VC investment, with $800 million raised across 72 deals, including a $219 million raise by alternative fuels producer Enerkem. Brazil also saw a nice quarter of VC activity, with Nubank achieving unicorn status following a $150 million raise.

Europe saw $5.2 billion in VC investment in Q1'18. Amid a quarter-over-quarter decline, Q1 was the fourth highest on record in the region. The number of European VC deals continued its sharp decline, falling to 548, less than half of the number of deals seen during the same quarter last year.

Asia continued to see large deals in Q1'18, as two $1 billion+ megadeals were struck outside China with Singapore-based Grab raising $2.5 billion of Series G financing, and GO-JEK in Indonesia closing on $1.5 billion of Series E funds. While VC investment in China fell significantly quarter-over-quarter, the country saw a healthy number of $100 million+ megadeals and an increase in the number of deals. India's VC market got off to a great start in Q1'18, seeing a strong rebound in investment. Food and grocery delivery was the hottest area of investment this quarter, with unicorn company Zomato raising $200 million and BigBasket raising $300 million.

Strong outlook expected for remainder of 2018

VC activity globally is expected to remain strong heading into Q2'18, with an increasing focus on artificial intelligence (AI) autotech, and healthtech. With exit and IPO activity also expected to increase over the next few quarters, there will likely also be a renewal of activity at the earliest deal stages.

"AI will continue to a big bet for VC investors across regions because of its broad applicability across sectors and industries," said Arik Speier, Head of Technology, KPMG Somekh Chaikin in Israel. "Particularly in the healthcare space, AI has the potential to foster an entirely new model for providing healthcare, although in the short-term it will primarily be used as a mechanism to supplement existing services and extend the reach of healthcare practitioners."

You know KPMG, you might not know KPMG Enterprise. We're dedicated to working with businesses like yours. It's all we do. Whether you're an entrepreneur, a family business, or a fast growing company, we understand what's important to you.

The KPMG Enterprise global network for Innovative Start-ups has extensive knowledge and experience working with the start-up ecosystem. From seed to speed, we're here throughout your journey. You gain access to KPMG's global resources through a single point of contact—a trusted adviser to your company. It's a local touch with a global reach.

KPMG is a global network of professional services firms providing Audit, Tax and Advisory services. We operate in 154 countries and territories and have 200,000 people working in member firms around the world. The independent member firms of the KPMG network are affiliated with KPMG International

Cooperative ("KPMG International"), a Swiss entity. Each KPMG firm is a legally distinct and separate entity and describes itself as such.