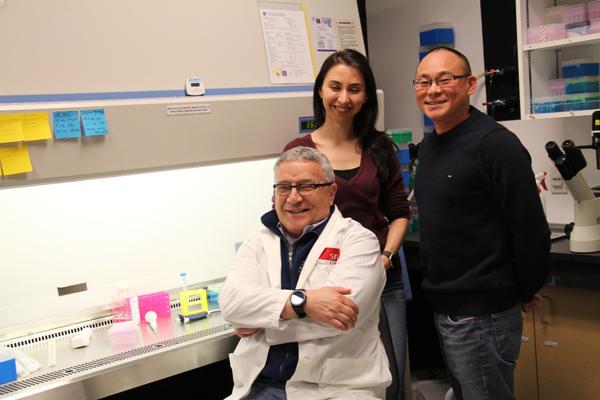 SFU professor Glen Tibbits and lab team members Sanam Shafaattalab, a PhD student, and Eric Lin, a research associate, are developing a tool to better identify the cause of SIDS.

Burnaby, BC, May 4, 2018--(T-Net)--SFU researcher Glen Tibbits and keys members of his lab are working to develop a tool to better pinpoint the cause of death in cases of Sudden Infant Death Syndrome (SIDS).

A professor in the Department of Biological Physiology and Kinesiology (BPK), Tibbits is receiving nearly $100,000 from the Stem Cell Network to advance his work, together with lab researchers Laura Dewar, Sanam Shafaat Talab and Eric Line.

"Sudden Infant Death Syndrome (SIDS) is a devastating occurrence for all those involved," says Tibbits. "It is particularly stressful when the cause of death is not identified despite thorough autopsies, toxicology, microbiology, X-ray and other analyses."

His tool will be used to demonstrate when sudden cardiac arrest (SCA) was the likely cause of death in specific SIDS cases that were shown to be "autopsy negative."

"It has been theorized that fatal electrical disturbances in the heart (arrhythmias) are causal in autopsy-negative SIDS in up to 30 per cent of the cases," Tibbits notes.

Besides confirming the cause of death, the tool can help reveal other details. "This is important for several reasons but probably more so because one or both parents and siblings may be harbouring a genetic mutation which is potentially lethal, and intervention is required," Tibbits explains.

Previous studies have found a number of mutations that have a strong association with SCA in infants. Tibbits' research will introduce five of these mutations into 10 distinct genotypes in blood samples from healthy donors. Once they have been reprogrammed into an embryonic stem cell-like state, he will carry out "genome edits" of the cells in order to differentiate and grow them in "monolayers" and evaluate their electrical activity to determine if they distray the underpinnings of electrical chaos.

A series of drugs and stimulants known to cause arrhythmias will be used to challenge these monolayers and see if they develop arrhythmias that are likely a precursor of SCA.

Tibbits hopes that after the first year of study his team will have generated a "gold standard" protocol in determining if a mutation found in an infant whose death was ruled as SIDS is likely caused by sudden cardiac arrest.

The SCN funding for Tibbits' team is part of $4 million in new funding for innovative stem cell and regenerative medicine research that will help translate discoveries into better health for Canadians.