Stephen Jenkins, graduate of the BCIT Renewable Resources Forestry program in the early 1990's who also later was an instructor in a course in the same program while working in industry, has made it his mission to change the landscape of energy in West Africa.

In 2016, Stephen became a founding partner in the collaborative enterprise Energies du Futur, which brings private companies together to partner on projects that create positive economic activity around renewable energy in West Africa. Their first mission was to build a clean energy facility in Senegal. 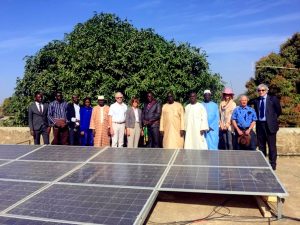 CSR project powering a Critical Care Clinic with solar power. Currently, only 40% of rural areas in Senegal, and 88% of urban areas, are connected to power.

To date, this facility:

Recycles over 1500 waste tires per day using ISO standards to recycle and recover oil and carbon;

Provides over 40 direct jobs and over 200 indirect jobs to men and women in a country that has high unemployment;

Integrates a large corporate social responsibility component, including solar power for a critical care clinic, repairing the town's only ambulance, funding 48 hours of clean up, and providing vehicles for garbage collection.

At the end of 2014, Stephen went to Senegal to look at biomass opportunities.

"While the use of biomass and the resulting deforestation issues are striking, all I could see was the waste. The opportunities to utilize this in a beneficial way seemed obvious to me," said Stephen. 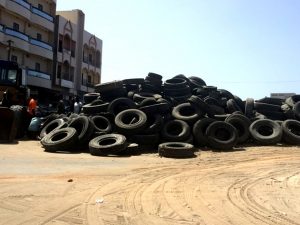 Waste tires are a huge problem in West Africa.

He returned home and discussed his ideas with close friend and Chairman of Goldcorp Inc., Ian Telfer. Stephen pitched his plan for a clean energy facility and both men contributed funding to launch the project.

"So, then I set off to Senegal again — not really speaking French and not speaking any Wolof (the local language)," said Stephen. "After three months with my nose to the grindstone and assistance from two partners in Senegal, I made some decisions about the viability of the potential projects. At that time, I realized that a large-scale, complex project would be slow and likely fail. This was due to many reasons including the Ebola crisis during late 2014, early 2015. A smaller-scale project that had meaningful impacts was clearly a way to build credibility and show people that investing in West Africa was safe despite people's general beliefs. So, the project of plastics- and tires-to-oil was born."

In October 2015, he was notified that their project had won an award at the 10th Annual Global Forum on Human Settlements for UNEP (United Nations Environment Programme). Stephen had previously won the same award for work he did in West Vancouver in 2011.

Energies Du Futur was formed in January 2016, with Stephen, Balanced Power, Ian Telfer and the Town of Nguekokh holding equity shares. They raised another $1M USD and worked at getting an Environmental Impact Assessment done, a very rigorous document that took eight months to be validated by the Panel of the Country. The project went through numerous public meetings, technical reviews and panel discussions.

"After 17 trips to Senegal, seven trips to China to check on equipment, and a few trips back to Canada, fast forward to January 31, 2017 when the facility was officially opened by the Canadian Ambassador," Stephen was proud to say.

"I have to thank Ian Telfer, David Emerson, Marie Lucia Morin, and Pamela Goldsmith Jones - all great Canadians - who provided me with great advice and assistance along the way," said Stephen.

The day Energies du Futur bought the land from the town Mayor (middle) for the clean energy facility (Stephen is pictured to the right of the mayor).

"My [education] at BCIT set the foundation for all that I do today," Stephen noted. "Not just the technical training in the renewable resources discipline, but also time management and to focus on what is really important."

"My instructors [had industry experience] and knew a lot about field work and the benefits of a practical approach and this is something I have always applied in the workplace. Most of all, it taught me the need to touch and feel what you are doing to learn deeply about your work and to involve other team members in a meaningful way. I would say to students and alums at BCIT, a place I have very fond memories of, that there is nothing so powerful as vision and belief. To quote Einstein: 'Intelligence is not knowledge, it is imagination'."

The good work being done by Stephen and Energies du Futur doesn't end there. The next phases of the project will focus on wind, solar, and waste-to-energy (solid and liquid). They are also using an invasive plant to make charcoal. The local government also has them looking into energy efficient solutions for the biggest dump in Africa, Mbeubeuss.