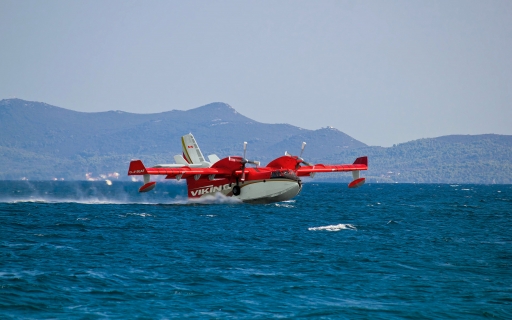 To initiate the program, LAAM will be hiring up to 150 technical and support staff members at its Calgary facilities, where eleven specially selected CL-215 aerial firefighting aircraft owned by LAAM will undergo the modification process utilizing Viking-supplied conversion kits.

To support development of the conversion kits, Viking has hired 50 new employees to date and has launched a recruitment campaign to hire an additional 50 staff at its Victoria, BC location. Viking will also be reinstating its very effective "Viking Academy" paid-training program to provide successful applicants with the targeted technical training required for these positions.

Both LAAM and Viking are working with local post-secondary institutions to develop innovative technologies and provide training assistance in support of this program. The Southern Alberta Institute of Technology (SAIT) has been engaged for personnel training in Alberta, and Viking is actively developing partnerships with companies participating in the British Columbia Technology Super Cluster initiative.

The Viking CL-415EAF Conversion Program forms part of a staged approach to utilize the advancements made with the LAAM converted aircraft as the basis for the proposed Viking CL-515 new-production amphibious aerial firefighting aircraft.

To facilitate the launch of the proposed CL-515 amphibious aircraft manufacturing program, Viking has applied to the Strategic Innovation Fund (SIF) from the federal Department of Innovation, Science and Economic Development (ISED) for funding support. The SIF funding would be invested between British Columbia and Alberta's aerospace manufacturing, supply chain, academic, and skills training sectors, and provide program benefits to both provinces in Western Canada.

In 2018, LAAM, in partnership with Viking, formally launched the CL-415EAF "Enhanced Aerial Firefighter" aircraft conversion program. The CL-415EAF combines the proven performance of the CL-215 airframe with modern upgrades to create the next generation of the world's only purpose-built aerial firefighter and multi-mission amphibious platform.

Headquartered in Victoria, BC, Viking is the global leader in utility aircraft services, and the manufacturer of the world-renowned Series 400 Twin Otter. Viking is the Original Type Certificate holder for all out-of-production de Havilland aircraft, DHC-1 through the DHC-7, and provides exclusive spare parts manufacturing and product support for the legacy de Havilland fleet. In 2007, Viking launched the Twin Otter Series 400 production program, and to date new Viking aircraft have sold to 30 countries worldwide.

In 2016, Viking acquired the Type Certificates (manufacturing rights) for the Canadair CL-215, CL-215T, and CL-415 aircraft. With this transfer, Viking assumed responsibility for all product support for the global fleet of 170 aerial firefighters.

Viking is managed by Longview Aviation Capital and forms part of the portfolio of a prominent Canadian family investment firm that maintains a long-term investment horizon and is one of the leading investors in the Canadian aviation industry.