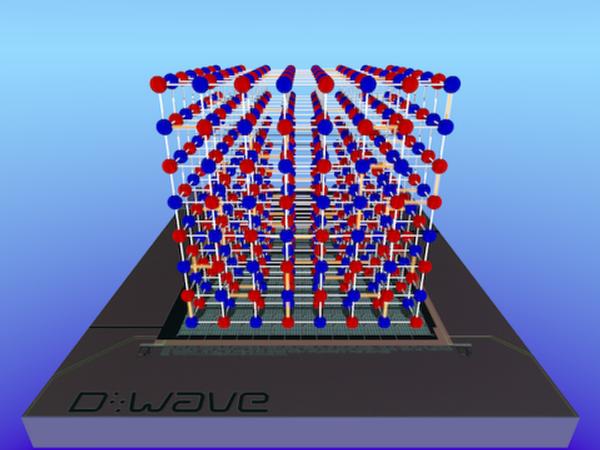 Burnaby, BC, July 20, 2018--(T-Net)--D-Wave Systems Inc., a leader in quantum computing systems and software, announced the publication of a significant scientific result in the peer-reviewed journal Science [Science, July 13, 2018].

This work has significantly raised the bar in regards to size and complexity of the problems addressed by fully programmable quantum computers. The D-Wave system is capable of programming the individual interactions between spins, whereas prior work with other quantum devices was limited to studying systems in which those interactions could not be individually programmed.

In the work described in the Science article, researchers used a 2048-qubit D-Wave quantum computer to study the transverse field Ising model on 3-dimensional simple cubic lattices up to dimensions of 8x8x8 (512 quantum spins). The magnetic phases, and more importantly the phase transitions, were correctly identified within the 3-dimensional space as a function of quantum mechanical energy scale, the strength of interactions between spins, and disorder among the programmable interactions.

E.H. "Ned" Allen Ph.D., Chief Scientist and Corporate Senior Fellow at Lockheed Martin, commented on the work described in Science: "Over the past two years, D-Wave scientists and engineers have accomplished a premiere goal of scientific computing: characterization of the phase behavior of a genuinely new material not found in nature by a precisely controlled quantum computer used as a simulator (see R. Harris et al, Science, July 13, 2018)."

"While it's not a demonstration of the "quantum supremacy" sought by pundits of quantum computing, it is a more important accomplishment because the problem they've attacked is one of immediate significance to today's advanced technology sectors and it is the first truly useful application of a quantum computer. A crucial contribution of the Harris group's work, then, is that it shows us how to explore the behavior of novel system designs without having to completely understand them first, as we must to write a useful digital simulation code. So D-Wave's tools presented in the paper are useful in initial conceptualization and invention - not just analysis.", he continued.

According to scientists at D-Wave, this work is important in the following regards:

"This work represents an important milestone for quantum computing, because it is the first time physics of this kind has been simulated in a scalable architecture at such a large scale," said Vern Brownell, CEO of D-Wave. "It also provides unprecedented validation for annealing quantum computing, which is the basis of D-Wave's quantum technology."

In 1982, the theoretical physicist Richard Feynman proposed the use of an engineered quantum system, a so-called quantum simulator, as a quantum computer to study computationally challenging quantum mechanical problems.

While many quantum mechanics calculations for even modest-sized systems become intractable using classical digital computing technologies, a quantum computer can successfully perform those computational tasks with relative ease. Thus, a practical large-scale quantum computer will be a key enabling technology for advancing many branches of sciences and engineering.