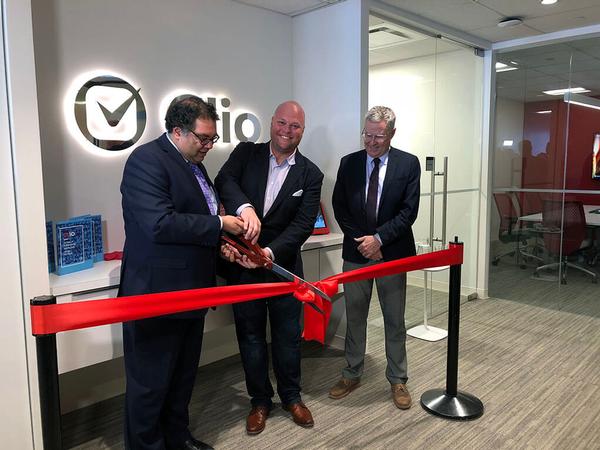 Burnaby, BC, July 3, 2018--(T-Net)--Clio, a Vancouver-based leader in cloud-based legal practice management, announced that it has opened its newest office in Calgary, expanding their team to be part of the city's new technology frontier.

The new office marks a landmark moment in Clio's history with Calgary, as the company has had a small but growing remote team in the city since 2010. The new office formalizes the company's investment in the Calgary tech scene.

"With the launch of our new office, we are officially laying down roots and committing to growing our Calgary team," said Jack Newton, CEO and Co-founder of Clio. "There is a tight-knit tech community that is working together to distinguish the Calgary tech industry within North America, and we are honoured to be a part of the movement."

Previously, the building was owned and occupied by leading North American energy producer, Encana. In 2015, the building was sold to Calgary-based Aspen Properties and redeveloped into the Edison, which is quickly becoming the city's headquarters for tech collaborators and innovators.

Clio will be joining innovative companies RocketSpace, Showpass, chata.ai, and Entuitive in this building, turning the once symbolic oil property into a tech incubator.

Calgary's technology landscape is continuing to boom with leadership from Mayor Naheed Nenshi and Mary Moran, President and CEO of Calgary Economic Development, garnering recent interest from Silicon Valley technology companies. Both the Mayor and Moran are excited to see Canadian companies, like Clio, investing in the Calgary tech scene and the city's newly thriving technology industry.

"Clio is part of a clear, positive trend in Calgary's tech sector," said Mayor Nenshi. "This is the result, in part, of a very deliberate strategy by The City of Calgary and Calgary Economic Development to grow industries that already have solid roots in our community. With every announcement like this, we are creating a better, more diverse, and more resilient economy that will benefit all Calgarians."

"Clio has established itself as a global leader in legal practice management over the last 10 years and expanding the operations into Calgary to take advantage of the tremendous growth opportunities in this city is a terrific way to kick off the next decade for the company," said Mary Moran, President and CEO of Calgary Economic Development. "Startups like Clio are an inspiration for entrepreneurs everywhere that good ideas can become business successes."

Clio's office boasts a 5,000 sq. ft. open concept layout to encourage collaboration, and features eight different meeting rooms, lounges, and one-on-one spaces to accommodate any size and style of meeting. With 11 employees currently, the office was built for future growth with 19 additional desks expected to be filled by the end of 2019.

Founded in Vancouver, Canada in 2008, Clio is the most comprehensive cloud-based practice management platform for the legal industry. With the help of the cloud, Clio eases the processes of time tracking, billing, administration, and collaboration for law firms of all sizes. One of Canada's fastest-growing companies with international reach, Clio employs over 250 individuals with a rapidly growing customer base spanning 90 countries. Clio has been named one of CIX's Top 20 Most Innovative Technology Companies, and for the last two years, has been recognized by Deloitte on both the Fast50 and the Fast500 lists, and was just named one of Canada's Best Managed Companies. Learn more at clio.com.