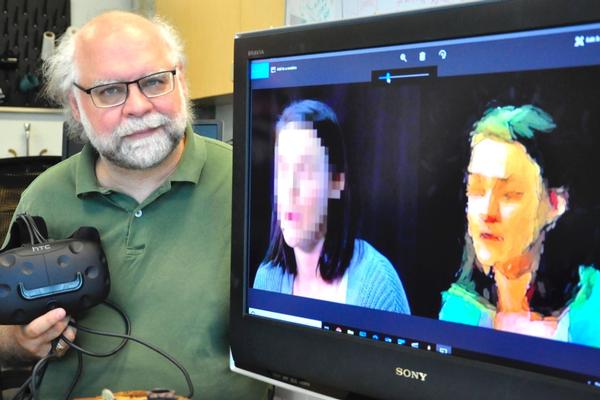 Burnaby, BC, August 2, 2018--(T-Net)--A research team from SFU's School of Interactive Arts and Technology (SIAT) has come up with a way to replace the use of 'blurring' faces in news reports when anonymity is needed.

The team's method uses artificial intelligence (AI) techniques that aim to improve visuals while amplifying emotions tied to the story.

SIAT professors Steve DiPaola and Kate Hennessy, together with Taylor Owen from UBC's journalism school, received a Google/Knight Foundation grant to carry out the research. They presented the work to international journalists at a Journalism 360 demo event honoring grantees in New York on July 24, and the next day at a full conference held across the street from the New York Times headquarters.

"Our goal is to create a working technique that would be much better at conveying emotional and knowledge information than current anonymization techniques," says DiPaola, a pioneer in AI/VR facial recognition processes.

Based on its research, the team has created an updated pixelating technique using an AI "painting" approach to anonymization.

"When artists paint a portrait, they try to convey the subject's outer and inner resemblance," says DiPaola, who heads SFU's Interactive Visualization Lab. "With our AI, which learns from more than 1,000 years of artistic technique, we have taught the system to lower the outer resemblance and keep as high as possible the subject's inner resemblance - in other words, what they are conveying and how they are feeling.

"Our system uses five levels of AI processing to simulate a smart painter, using art abstraction to repaint the video as if an artist was painting every frame. The result is more engaging, especially since not everyone listens to stories - so the art component becomes more relevant."

The system doesn't change the pixels of the video frames as Adobe-like systems can, but instead produces a painting-style result of every frame, DiPaola notes. "It's actually an open and dynamic process that allows levels of control throughout. We eventually want to the subject or producer to be able to customize the final result based on their needs."

DiPaola says the tool's effectiveness at anonymizing while retaining a strong degree of emotional connection or resonance should result in better final product for anonymized video, especially in 360 or VR. The team plans to put the technology to work in a variety of projects.

While at the conference DiPaola's team garnished interest from several major media companies looking to explore new media approaches, including the New York Times, Washington Post and the BBC.

For more on the research see www.AIpaint360.org.