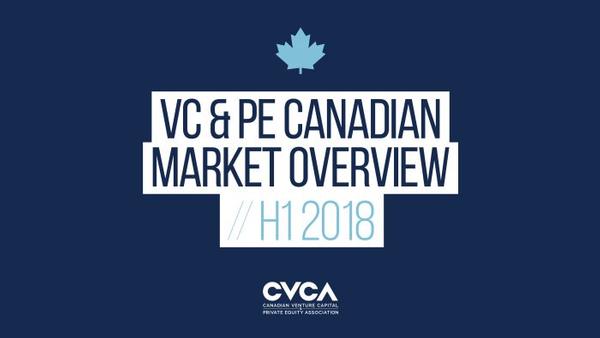 Toronto, ON, August 23, 2018--(T-Net)--Venture capital investment in Canada continued its five-year upward trajectory in the first half of 2018 showing no signs of slowing for the remainder of the year.

"Innovation in Canada is enjoying the best venture capital investment climate in well over a decade," says Mike Woollatt, Chief Executive Officer, Canadian Venture Capital and Private Equity Association. "We're consistently observing an increase in size and volume of deals at all stages; plus, a welcome resurgence in exits. We're bracing for 2018 to be another record year."

There were 16 exits so far in 2018 continuing the rebound from last year. These included the $141M corporate acquisition by Eli Lilly of AurKa Pharma, a TVM Life Sciences Management portfolio company and the $100M transaction in Coveo Solutions Incorporated by a U.S. -based private equity firm.

Keeping pace with the last two years, there were seven mega deals ($50M+) in the first half of 2018, totalling almost a half a billion dollars. Of the seven, Toronto-based Ritual raised $90M in a series C round led by Georgian Partners. Toronto-based ecobee Increceived $80M in series C financing which included participation from Relay Ventures. Ecobee Inc also received a $47M follow-on investment from BDC Capital and Caisse de dépôt et placement du Québec. Toronto-based TouchBistro Inc. raised $72M in a series D round from a syndicate led by OMERS Ventures and included participation from BDC IT Venture Fund and Relay Ventures.

The CVCA is the voice of Canada's venture capital and private equity industry. We are focused on improving the private capital ecosystem by broadening industry awareness and providing market research, networking, and professional development opportunities. We also advocate on behalf of the industry to ensure sound public policy that encourages a favourable investment environment. The CVCA works alongside its members, who represent the vast majority of private capital firms in Canada, to improve the industry and drive innovation and growth. Please visit: http://www.cvca.ca.