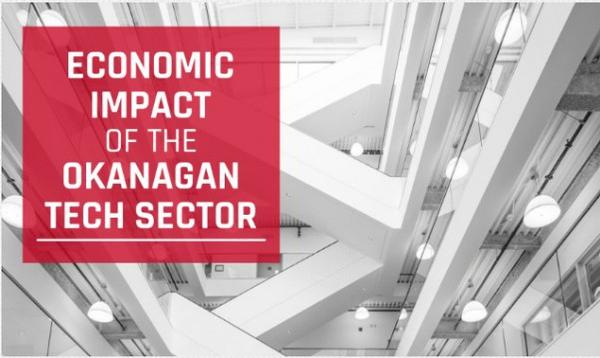 The report, now available on the association's website, has lots of good news for the Okanagan economy, including year-over-year economic growth of 15% since 2013.

The tech sector is estimated to contribute $1.67 billion to the region's economy.

"We are excited by the consistent growth indicated by the findings in this report," says Raghwa Gopal, CEO of Accelerate Okanagan. "This study provides proof of what those working in the Okanagan tech sector have long known: big things are happening here, and we're just getting started. The Okanagan is ripe with potential for entrepreneurs of all kinds."

There are now 693 technology businesses operating in the Okanagan, which represents a 24% increase since the first survey was conducted in 2013. Those companies, including home-grown success stories like BananaTag, Yeti Farm, Piscine Energetics, employ a total of 12,474 workers.

"We were interested to see that the Okanagan's tech workforce is getting younger, and that contract workers make up more than 15% of those working in the sector," says Gopal. "We believe this reflects the growing gig economy, as well as the appeal of living in the Okanagan. Many members in the gig economy can live anywhere, and they're choosing to live and work here."

Indeed, lifestyle was named in the survey as the number one advantage of operating a tech or tech-enabled business in the Okanagan. 81% of respondents named lifestyle as an advantage; climate and commute time were selected as the second and third biggest advantages, respectively. Challenges associated with the Okanagan tech sector were a small talent pool, distance to clients and cost of living.

"The goal of this survey was not just to quantify economic impact and celebrate our sector's many successes, but also to take the pulse of the Okanagan technology community," says Gopal. "Learning about what's challenging the companies operating here — and working to address and overcome those challenges — is vital to ensuring that the tremendous growth we've seen continues into the future."

The Economic Impact of the Okanagan Tech Sector study was conducted by a third-party researcher through Small Business BC. Data was collected from 103 Okanagan tech companies via an online survey. This is the third economic impact study commissioned by the Okanagan-based technology accelerator, which conducted studies in 2013 and 2015 using the same process. This year's report also draws on benchmark data from the latest iteration of the Province of British Columbia's annual Profile of the British Columbia High Technology Sector.

"The 2018 Economic Impact of the Okanagan Tech Sector provides proof to back up anecdotal evidence pointing to the Okanagan as an exciting hub for tech and innovation in BC, " says Corie Griffiths, Director of the COEDC. "Local tech and tech-enabled companies across industry sectors are solving complex problems in the Okanagan and around the world, driving international attention to the region and employing more than 12,000 highly skilled workers. It's all here, now."

Looking for more? Dig in to the full 2017 Economic Impact Report.