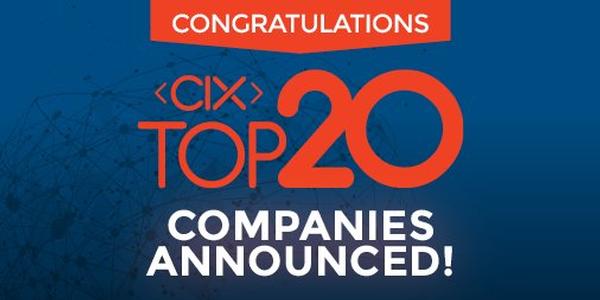 The winning companies represent a diverse range of tech including software, medtech, fintech, big data, security, Saas and cleantech. These game-changing companies on the rise are chosen by a selection committee made up of technology industry experts and investors from across the country.

Hundreds of profiles were submitted this year from all regions of Canada.

Companies were chosen based on a number of key factors including product/service offering, depth of management, market opportunity, and business model.

"We received 30 percent more submissions this year for the 2018 CIX Top 20 Program, with 18 per cent from female-led startups," said Lauren Linton, Executive Director of CIX. "It is exciting to see more women founders with such great potential to contribute to Canada's success as a global innovation leader. Eight of the CIX Top 20 companies have female founders. We were also pleased to see so many companies from coast to coast."

The CEO of each CIX Top 20 company will present at CIX 2018 on Oct 22-23 and share their story and unique innovation to a crowd of over 700 investors and peers in the North American technology ecosystem. Alongside these showcases will be dynamic sessions led by top tech business leaders, investors, and entrepreneurs.

"Being part of the CIX Top 20 brought Zoom.ai a lot of exposure, which is exactly what we needed since as a 9-month old startup we were still not yet well known," said Roy Pereira, CEO & Founder, Zoom.ai, and a CIX Top 20 company in 2016. "Since then, our brand awareness has shot up and we've recently closed our seed round of financing, in part due to that extra exposure from the CIX Top 20."

CEOs and Founders of CIX Top 20 companies will be invited to open the TMX market on Oct 1, alongside other key players in the CIX community.

CIX is Canada's only national curated startup investment conference. Invited attendees are founders of Canada's most innovative early and growth-stage tech companies and global investors and corporates. Due to the high level of companies at CIX, it attracts delegations of investors from around the world. CIX takes place over two days, Oct 22-23, 2018, in downtown Toronto. http://cixsummit.com/2018/.