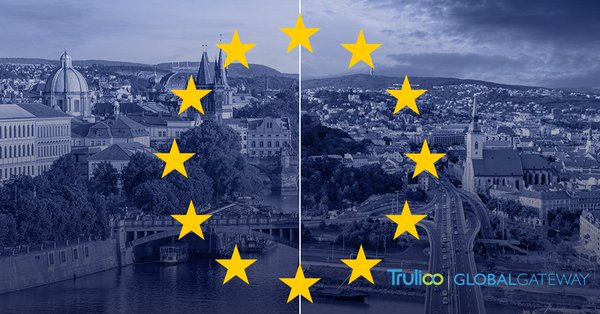 Vancouver, BC, January 14, 2019--(T-Net)--Trulioo announced today that its flagship solution, GlobalGateway, can now be used to verify customers in Czech Republic and Slovakia.

Just two months ago, Trulioo hit a milestone of five billion verifiable identities worldwide. The team continues to add new data partners to its platform to help provide all citizens with access to financial services, including the unbanked and underserved groups.

"Expanding our solution to both the Czech Republic and Slovakia is critical," said Stephen Ufford, CEO and founder of Trulioo. "Not only are they two of the fastest growing economies in Europe, but they're also home to some of the fastest growing tech companies in Central Europe," said Ufford. Indeed, both Bratislava (Slovakia) and Prague (Czech Republic) are considered to have the best tech ecosystems in Central Europe.

Around the world, some of the world's biggest tech companies, banks, financial institutions, financial services, along with major online marketplaces, and gaming companies use GlobalGateway to comply with regulations, mitigate risk and prevent fraud.

Keeping pace with new regulations and technologies in growing markets, however, is an ongoing process. As technology, consumer behaviors, laws and international standards continue to evolve, fraudsters, too, acquire sophisticated ways to launder money for nefarious activities. Today's fraudsters are well-funded, skilled and equipped with cutting-edge technology. Criminals have developed new methods of concealing their identities and laundering money, presenting a huge challenge to companies, law enforcement and regulators.

For instance, earlier this year, one of the world's largest taxi aggregators, along with one of the top vacation rental platforms, came under heavy scrutiny after it was revealed that money launderers were using them to move money across borders.

As member states of the European Union, both Czech Republic and Slovakia would have to comply with the EU's strong anti-money laundering regulations.

According to the State Department's report on the Czech Republic, the country's strategic location and openness as a market economy leave it vulnerable to money laundering. Recently, it became a party to the United Nations Convention against Corruption (UNCAC) as well as the OECD Anti-Bribery Convention.

Also, the Slovakian government recently approved a proposal that amends an existing act to increase the transparency of ownership of legal entities and the preservation of information. Under the amended act, all legal entities and special purpose asset arrangements are obligated to register and maintain documentation on ultimate beneficiary owners (UBOs).

The UBO's identification details must be recorded by a legal entity each year and for a period of five years after the termination of the UBO's status, according to Cechova and Partners.