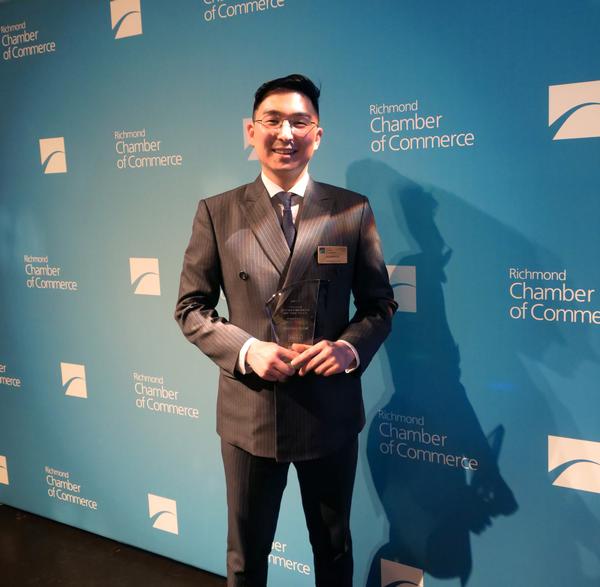 Richmond, BC, November 25, 2019--(T-Net)--BlackboxMyCar announced today that its CEO, Alex Jang, is the winner of the 2019 Young Entrepreneur of the Year Award at the 42nd Annual Business Excellence Awards, hosted by the Richmond Chamber of Commerce on November 21st, 2019 at the River Rock Show Theatre in Richmond, BC.

Since 1977, the Richmond Chamber of Commerce has honoured the outstanding achievements of Richmond businesses, and at the 42nd Annual Business Excellence Awards, they celebrated excellence in ten different categories, with BlackboxMyCar as one of three finalists in the Young Entrepreneur of the Year category, competing for the prestigious award against two other local businesses; Clean Break Home Services and Harmony Dental Studio.

Over 350 of Richmond's community & business leaders attended this sold-out gala dinner and reception.

Through this, Jang set out to introduce dashboard cameras to the North American market and educate the public about their safety, benefits and advantages.

Starting his business from home, Jang grew his company, earning just $75,000 in annual revenue in its first year, with this number growing exponentially in latter years. Like many start-up companies, Jang says he faced rejection as he approached local businesses to carry his products and dealt with high costs from manufacturers, making it difficult to compete with other online suppliers.

By prioritizing exceptional customer service, Jang says he overcame these challenges and built strong relationships with customers, providing comprehensive information through blog posts, social media reviews, free e-learning guides and in-house expertise on its website and earning a strong reputation as a leader in the industry.

Jang was also able to build strong partnerships with a number of government departments, including the RCMP, CSIS, Justice Institute of BC, and the FBI, to name a few.

7 years later, operating out of its office in Richmond, BC with a team of 16 employees, BlackboxMyCar continues to be North America's largest dashboard camera retailer, according to the company.

CEO Alex Jang, a former student studying Nutritional Sciences at the University of British Columbia, founded BlackboxMyCar in 2012 during his second year after his family member was involved in a car accident, resulting in a lengthy insurance claim and legal case that took many years to resolve. Without an unbiased perspective on scene at the accident, Jang realized that dashboard cameras, which were mostly popular in Europe and Asia at the time, would have helped provide evidence in resolving their claims much more quickly.

"I would like to thank the Richmond Chamber of Commerce for recognizing me with the 2019 Young Entrepreneur of the Year award. I am deeply honoured," says Jang. "This award would have never been possible without the dedication and support of my team at BlackboxMyCar who continue to pour their hearts and souls into their work every day. Our customers are the bedrock of our success, and they're the ones who keep us going everyday. We would not be here today without them, so we would like to thank all of our customers for the invaluable advice and feedback that they have given us to help us grow over the last 7 years. On behalf of the team at BlackboxMyCar, thank you to the Richmond community."

Our brand is based around thought-leadership and being a trusted source for information on dashboard cameras for our customers, partners, and the media. We envision a future where every driver is protected from auto insurance fraud, careless driving and vehicle vandalism. We aim to protect our community so that every driver will feel safe on the road, trusting a dashboard camera as a silent witness on board to provide video evidence will ultimately create a safer community around us.