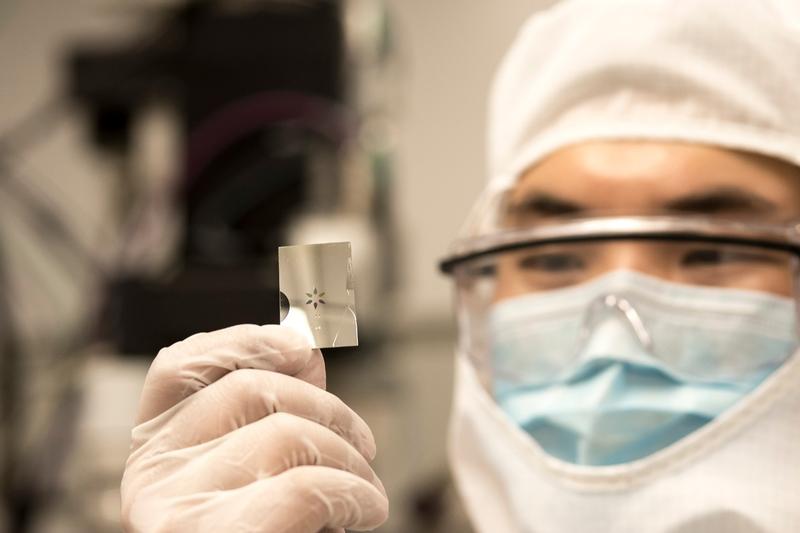 Burnaby, BC, December 31, 2019--(T-Net)--A collaboration between SFU researchers from the School of Engineering Science and renowned visual artists to explore and co-create nano-material technology has led to a unique nano-optical art medium, and a new, cost-effective production process for fabricating it.

The field of nanotechnology explores structures at the nanometre level—there are one million nanometres in one millimetre—and allows customizations at such a small scale that the resulting new materials can revolutionize technologies for a variety of applications including data transmission and storage, security and visual media. However, the development of new nano-materials is a challenging process.

"We started from a problem that exists when working with nanostructured materials," says Jiang, who helped to develop the processes that were fundamental to Nano-Verses.

"Before this, if we wanted to make an image that was one centimetre by one centimetre in size using nano-optical image-making, it would take an entire week in the laboratory and thousands of dollars for each unique image," he says.

These images, known as nano-optical variable devices, are the foundation for the shimmering anti-counterfeit images used in banknotes and concert tickets.

"We created a whole new production process where it costs just as much to make one image as it does to make one thousand," says Jiang. "That was an important development in terms of cost and scalability for this kind of technology and material."

Interested in exploring the new-found potential of their technology, Aleksandra introduced the Ciber team to Davis and Lyall with the intent of developing unique artwork that explores issues of scale, light and surface interactions.

They called the result NanoMedia.

To make NanoMedia, the Ciber researchers, led by Bozena and Jiang at SFU's 4D LABS, applied light-sensitive chemicals onto a surface (substrate) that contains one billion nanostructures per square centimetre. These nanostructures can reflect any colour of light and be tuned to display pixels of specific colours.

Then, in a process similar to developing film photographs, the chemicals/substrate are exposed to UV light or a UV laser writer and the pixels, now reflecting select colours in a predetermined arrangement, reveal the artist's intended image or colour motif.

"The whole process was very hands-on with the artists," says Bozena. "We had to learn from each other to make the technology correspond to what they had in mind, and vice versa. We also had to learn to think about our technology differently, with different objectives and criteria."

And because the production process was so new to both the artists and the researchers, the team was challenged to experiment with many different combinations of substrates, chemicals, and finishing materials such as polymers, textiles and metals to best produce each of the artist's visions.

The finished images can have high resolution—up to 12,700 pixels per inch—and appear iridescent as light reflects off each of the billions of tiny nanostructures in the finished medium. They can also tune the structures to reflect information in infrared light, the same as how a QR- or bar code functions.

The team's first work resulted in 1,000 copies of a front-page insert for the 50th-anniversary edition of the Canadian interdisciplinary journal, PUBLIC. The image, designed with Davis, depicted iridescent nano-optical stars shimmering on a transparent material overlaid onto a photograph of a night-time forest.

Later, with Lyall, they developed a series of framed art pieces on metal foils for an exhibition in New York City, U.S.A. Davis then used the foils to make luminescent objects, which she exhibited in Toronto, Canada. The artists have since produced additional shows of those pieces in Toronto and New York, as well as new artwork for shows in London, England and Paris, France, including at the prestigious Frieze art fairs.

Since demonstrating the new production process for NanoMedia, the Ciber team is now commercializing it with industry partners.

Because of NanoMedia's complex fabrication process and unique structure, the resulting products are nearly impossible to counterfeit, making them ideal for the security printing industry for products such as banknotes and passports. Davis and Lyall, meanwhile, continue to work with the nano-optical material.

This month, Aleksandra (who is now a professor at the University of Montreal) launched a website that presents the multi-faceted nature of the project—"the many verses of NanoMedia."

The website itself was built through experimentation with artists/web designers Frédérique Laliberté and Boris Dumesnil-Poulin. Together, they explored how to best present and communicate Nano-Verses from its inception, and how to communicate the way that a scientific idea was probed and studied by a variety of researchers and artists.

"This was truly interdisciplinary," says Bozena. "We took the highest fabrication techniques in nanotechnology and made an entirely new medium that is as intriguing for artists as it is useful for authentication and communication."

Says Jiang, "This project was a result of the efforts of our lab, the artists and our partners coming together to make something new. It was an amazing experience for everyone involved."