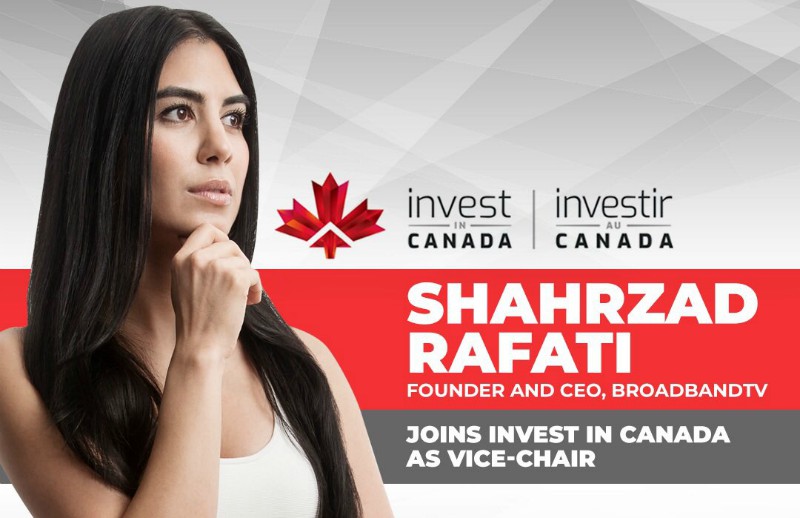 Investor, entrepreneur, and Founder & CEO of BroadbandTV, Shahrzad Rafati, joins Invest In Canada as Vice-Chair of the Board of Directors.

Vancouver, BC, May 21, 2019--(T-Net)--Invest in Canada announced today its new Vice-Chairperson in entrepreneur and Founder & CEO of BroadbandTV (BBTV), Shahrzad Rafati, who will jointly oversee the management of the federal agency alongside Chairman Mitch Garber and CEO Ian McKay.

As Invest in Canada looks to achieve its objectives of facilitating foreign direct investment, Shahrzad's addition to its board of directors further builds on the firm's diverse expertise and influence.

Canada's profile as a hub for international business has led to $824 billion in foreign direct investment (FDI) between 2008 and 2018.

As the competitive landscape for international investment continues to evolve, Invest in Canada seeks to showcase the country's key appeals of diverse and highly skilled talent, its economic growth and innovation across multiple industries, and its geographic advantage as a central hub for global trade.

"We are making Canada a top destination for international businesses to invest and grow their operations. As the premiere G20 country in which to start a business and as a leader among G7 nations in economic growth, Canada will continue to invest in attracting international investment, so that Canadians can continue to prosper. I have utmost confidence that Ms. Rafati and Mr. Cohon will make strong additions to the board at Invest in Canada and will continue to promote Canadian business values through their work there." Said Jim Carr, Minister of International Trade Diversification.

In addition to her role as the Founder and CEO of BroadbandTV, a leading media and technology company in Vancouver that generates 38 billion monthly views as the third largest video property in the world, Rafati is an investor and advisor to several Canadian and international businesses.

She serves as a board member on local and global companies including Vancouver's Hootsuite, and Denmark's Bjarke Ingels Group (B.I.G.), and she previously sat on the boards for the Forum of Women Entrepreneurs, and the Vancouver Economic Commission.

Rafati's leadership and experience extends beyond media tech and the private sector, with leadership roles in non-profit and public sector initiatives that further bolster Canada's presence in international economic and societal issues, including her 2018 appointment by Prime Minister Justin Trudeau to the G20 2018 Business Women Leaders Taskforce.

"Having been on both sides of the table as an investor and an entrepreneur in Canada and abroad, I've seen first-hand the amazing potential for Canada to draw powerful international appeal" said Rafati about joining the federal agency. "As Invest in Canada's Vice-chair, I'm excited to increase foreign investment in Canada that drives our economy, creates more Canadian jobs, and inspires leadership in innovation nationwide."

Throughout her tenure as Founder and CEO of BBTV, Rafati has successfully secured domestic and international investment in the company, including in 2013 the largest financial placement in a Canadian Internet media company since 2007.

Invest in Canada's appointment of Rafati as Vice-Chair aligns with its continued efforts to secure foreign investments in Canada, bolstering the agency's diverse influence across Canada's growing and established industries.

About Invest in Canada

Invest in Canada is an investment promotion agency aimed at facilitating foreign direct investment to spur job growth in Canada. Through strong collaboration with public and private partners, we are your primary point of contact. We provide guidance, information and connections to accelerate your business expansion decisions. https://www.investcanada.ca