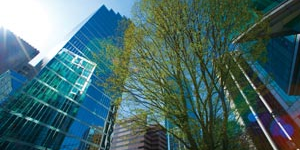 Burnby, BC, May 3, 2019--(T-Net)--Despite many new, high-end condo buildings being marketed as being energy-efficient, British Columbians living in them have a much larger energy footprint than those living in older condos and apartments - regardless of what they may think.

A new BC Hydro report titled "High-powered high-rise: The energy footprint disconnect of B.C.'s high-end condo dwellers" [PDF, 211 KB] found that while condo living means smaller homes that use less power than detached single-family homes, this does not necessarily represent the total energy footprint of living in a high-rise condo building.

New BC Hydro data shows that the amount of electricity used in condos has nearly doubled since the 1980s, with the largest period of growth between 1999 and 2009 when the average newly built high-rise building's electricity consumption increased by 65 per cent.

This is likely due to the addition of more luxurious amenities like heated pools, hot tubs, saunas, fitness centres and movie theatres.

High housing prices have led more British Columbians to purchase condos over townhomes or single-family detached homes. In fact, BC Hydro has seen a 22 per cent increase in the number of condo and apartment accounts since 2011 - and they now represent nearly half a million accounts in total. With sales, and construction of high-rise buildings increasing, so is the amount of power being used. High-rise luxury buildings consume about three to four times more electricity than low-rise buildings.

While apartment and condo dwellers have average electricity bills that are about 50 per cent lower than those in the average single-family home, these lower bills do not provide an accurate picture of their electricity use. Despite the suites in newer high-rise buildings often being marketed as energy-efficient and including things like LED lighting and ENERGY STAR® appliances, the combined electricity usage of the overall building is approximately two times more than high-rises built in the 1980s.

Fifty per cent of a high-end condo's electricity use goes to powering all of the things outside of the individual suites. This includes the energy required to power the luxury amenities as well as the energy required to run the elevators, light the lobby, hallways and parking garage, plus operate the heating and cooling systems, all day, every day.

If this cost appeared on a condo dwellers' electricity bill, it would add about $40 a month - nearly doubling the average bill of $43 dollars a month. And bringing it very close to the average single-family home's bill at $103 per month.

Although energy efficiency might not be at the top of the list for an upscale condo buyer, the more energy efficient a building is, the more comfortable it will be for the tenants and the lower its operating costs will be.

BC Hydro says it recommends: