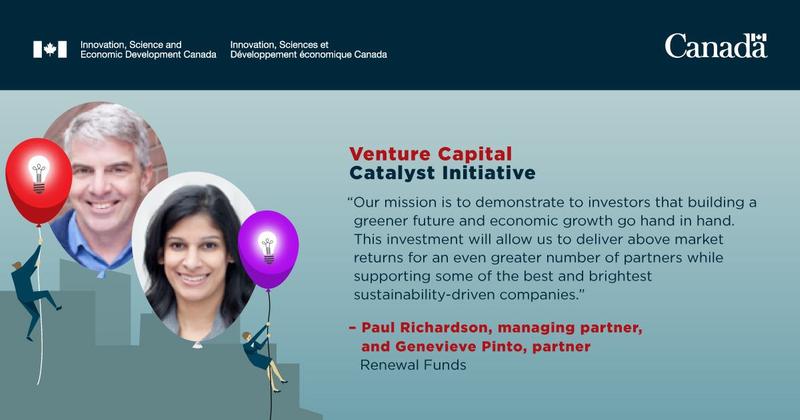 Vancouver, BC, June 6, 2019--(T-Net)--The Government of Canada, today announced a new $50-million investment and the successful recipients of further investment under its Venture Capital Catalyst Initiative (VCCI) that are intended to support investments in Canada's clean tech industry.

The $50-million investment will go to Vancouver-based Renewal Funds, Cycle Capital Management and ArcTern Ventures to enable them to increase their support of Canada's high-potential clean technology companies.

These three funds, headquartered across Canada, are dedicated to supporting companies committed to positive environmental impact through innovation.

Each venture capital fund that receives investment under VCCI is required to have a gender strategy to promote women and diversity in venture capital.

Clean technology is a high-growth industry in which Canada is emerging as a global leader.

The Government of Canada has also previously provided $400 million, through the Business Development Bank of Canada, in the Venture Capital Catalyst Initiative (VCCI). The investment is leveraging private sector capital and will result in an injection of about $1.5 billion into Canada's venture capital ecosystem, according to the government.