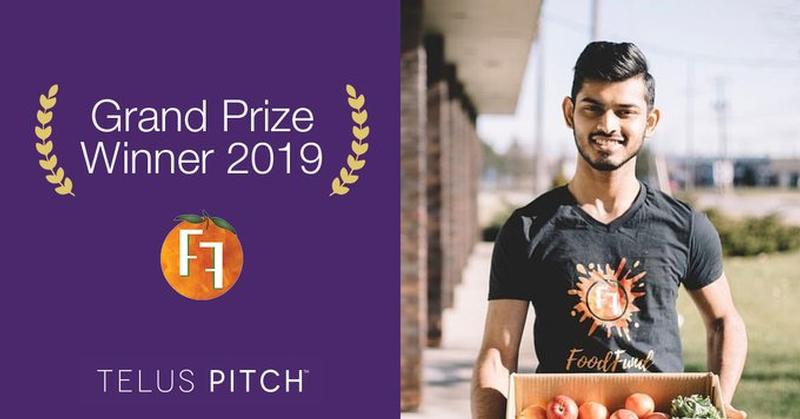 FoodFund Inc. - which received a $100,000 cash prize to help further build their business - was chosen from a group of five finalists who emerged from more than 6,400 entrants from across Canada.

FoodFund challenges the notion of perfect produce through an online subscription-based platform that connects imperfect produce from farms and distributors directly to households within local communities.

"Once again, TELUS Pitch has highlighted some of the most innovative, tenacious and passionate entrepreneurs in Canada who, through their commitment to create a better future, will help to make a profound difference," said Arlene Dickinson, lead judge for TELUS Pitch, General Partner, District Ventures Capital and Dragon on CBC's Dragons' Den.

"FoodFund has developed an exciting initiative that addresses real concerns that not only impact consumers and farmers, but our environment and economy. I look forward to following their story."

With the $100,000 prize, FoodFund Inc. intends to expand its operations, diversify its produce offering and build food literacy curriculum.

"It's a surreal feeling to win the TELUS Pitch and to rub shoulders with Canada's brightest entrepreneurs," said Divyansh Ojha, Founder of FoodFund Inc. "This is the stepping stone we need to take our business into new markets and amplify the impact we've already made."

The other finalists in this year's TELUS Pitch competition included: Creation Crate, Instage, Goldilocks and Higheredpoints, which each received a $10,000 cash prize.

In addition to the grand prize winner of the TELUS Pitch 2019, TELUS also handed out a series of awards recognizing the accomplishments of other outstanding entrants.

TELUS presented a "Community Impact" award to MPL Cuts, which has gone above and beyond to build a space that is not only a gender-affirming barbershop in Toronto, but a hub for the queer community. With the award, MPL Cuts also received $5,000 in Samsung products and $5,000 in-kind marketing services from Eighty-Eight.

TELUS also presented the "Most Promising Startup" award to Farmbucks, which was established to transform the Canadian agricultural industry by providing grain farmers with a one-stop shop online where they can access the best prices for their products according to location and grade. Farmbucks also received $5,000 in Facebook advertising credits and a one-year membership at Workhaus valued at $4,200.

Finally, TELUS presented the "Multicultural Business of the Year" award to Nom Nom Foods, which has created a range of healthy, family-friendly international food options with authentic world flavours. Along with the award, Nom Nom Foods received $5,000 of in-kind marketing services from Response and a one-year membership at Workhaus.

"TELUS is proud to support Canada's impressive entrepreneurs who are not only developing innovative solutions to practical problems, but making a difference in the day-to-day lives of many Canadians," said Roi Ross, VP Small Business Mobility Solutions, TELUS. "With their leadership, we can be sure to see the Canadian small business landscape continue to grow and thrive."

Watch how the exciting night unfolded via Facebook Live on the TELUS Business page to see the winner receive $100,000.

In support of our philosophy to give where we live, TELUS, our team members and retirees have contributed over $690 million to charitable and not-for-profit organizations and volunteered more than 1.3 million days of service to local communities since 2000. Created in 2005 by President and CEO Darren Entwistle, TELUS' 13 Canadian community boards and five International boards have led the Company's support of grassroots charities and have contributed $72 million in support of 7,000 local charitable projects, enriching the lives of more than 2 million children and youth, annually. TELUS was honoured to be named the most outstanding philanthropic corporation globally for 2010 by the Association of Fundraising Professionals, becoming the first Canadian company to receive this prestigious international recognition.