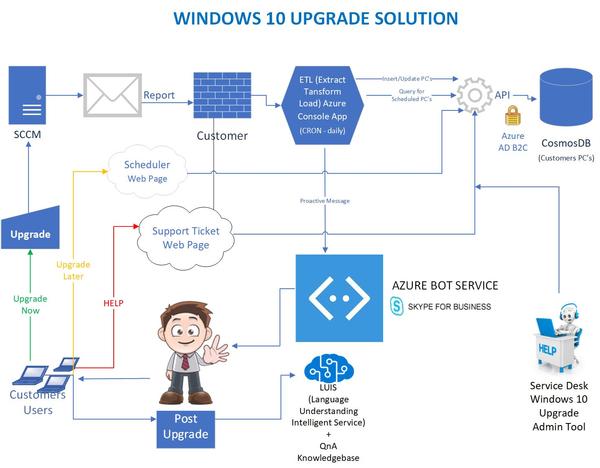 Vancouver, BC, August 19, 2019--(T-Net)--Coquitlam-based SaaSberry Laboratories has announced the availability of its new Skype Bot, built to automate device software upgrades across an enterprise.

SaaSberry recently delivered the successful rollout of a customized Skype Bot which was designed to improve the process and reduce costs of a Windows 10 upgrade project.

It then reaches out via Skype giving users the option to upgrade immediately or schedule a later date and alerts if no response, Skype Bot will deploy within a certain timeline without warning.

Version 1 of this bot created a 5X return from the customers' investment and has shown a 90% adoption success rate, according to the company. These efficiencies and adoption rates came in much higher than originally expected. As a result, SaaSberry and the client are now looking at how this bot can be expanded to other business process improvements.

"Our customized intelligent software continues to help clients disrupt traditional methods of operating a business. With our team of veteran developers combined with our Microsoft partnership, the number of possibilities of what we can do is endless," said Chris Cade, CEO of SaaSberry Laboratories.

Founded in January 2018 by Microsoft Alumni, built primarily using Microsoft Cloud technologies, SaaSberry is quickly growing into a worldwide leader of launching professional SaaS offerings. The company offers a wide range of services designed to fix business challenges which have a direct return on investment. SaaSberry is building and investing in new technologies to leverage artificial intelligence to change traditional methods of doing business.

The name SaaSberry and SaaSberry Innovation Laboratories Ltd., are wholly owned by Vancouver-based SaaSberry Labs. Microsoft is a trademark of Microsoft Corp. and is referenced only as a partner of SaaSberry.