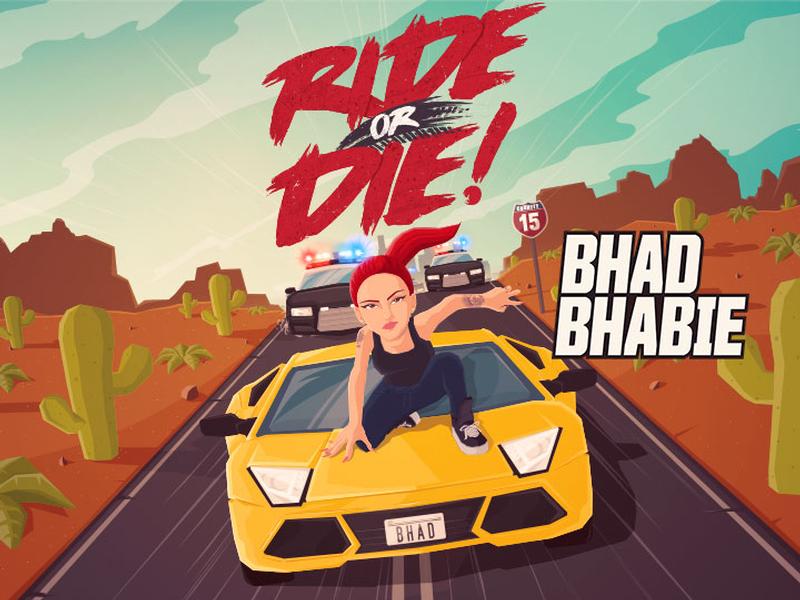 Vancouver, BC, September 20, 2019--(T-Net)--BBTV Interactive, a division of BroadbandTV Corp. (BBTV), a media tech company that is advancing the world through the creation, distribution, management, and monetization of content, has announced the launch of Ride or Die!, a new mobile game with joyriding gameplay for iOS & Android, featuring Bhad Bhabie, now the youngest artist to go Platinum in the last decade with her hit "Gucci Flip Flops (ft. Lil Yachty)", and the youngest female rapper to chart on the Billboard Hot 100.

In BBTV's Ride or Die!, gamers will play as Bhad Bhabie taking her through this mobile arcade-style joyride racing game. Players will leap from fire engines and ice cream trucks, to sports cars and taxi cabs as they dodge heavy traffic, and outrun the police in intense high-speed chases in the ultimate joyride.

"Play my game bich," said Bregoli, who has more than 16.9 million followers on Instagram and 6.7 million subscribers on YouTube. "Pick up yo damn phone and download this, it's free! Thank you BBTV for making this game - they got my nails and everything. Ride or Die with Bhad Bhabie bich!"

One of TIME Magazine's top 25 most influential teens, Bhad Bhabie is making her mark on the music world. She was nominated for Top Female Rap Artist at the 2018 Billboard Music Awards, currently has 150+ million views on her "Hi Bich" music video, and most recently signed a $1 million worldwide publishing deal with Pulse Music Group.

"BBTV Interactive is one of the company's revenue streams available to BBTV partners to help further build and monetize their IP, in addition to advertising, subscription, SaaS, e-commerce, licensing, and distribution and label services," comments Lewis Ball, VP Interactive, E-commerce and Professional Services, BroadbandTV. "Ride or Die!, which merges Bhad Bhabie's music and social communities with the mobile gaming space, is another example that showcases our depth of services, tech and first class service offerings. We are bringing the world of video and mobile apps together while activating our community to help further monetize the IP."

Ride or Die! is available now worldwide on the App Store and Google Play. The game is free to download and includes in-app purchases.

BroadbandTV (BBTV) is a media-tech company that is advancing the world through the creation, distribution, management and monetization of content. As of May 2019, BBTV generates 38 billion monthly impressions, and in February it achieved 575 million unique viewers which consume 46.9 billion minutes of video content per month.

BBTV is the second largest video property across the top 12 countries of the world in terms of unique viewers following only Google as of Feb 2019. BBTV provides end to end management, distribution and monetization solutions to content owners around the globe by providing innovative technology and leading services. BBTV has built proprietary VISO technologies leveraging deep learning, signal processing, and big data to power its ecosystem. www.bbtv.com