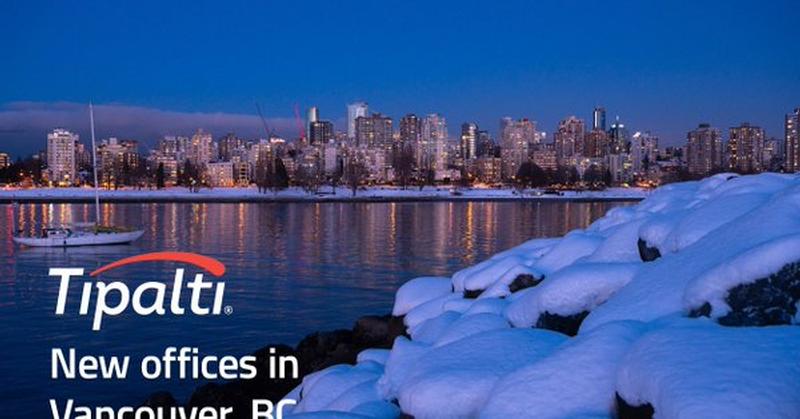 Vancouver, BC, and San Mateo, CA, January 22, 2020--(T-Net)--Tipalti, a leading global payables automation solution, today announced that it will be opening offices in Vancouver B.C., Canada.

This is the third global office for Tipalti, joining existing locations in San Mateo, California and Kibbutz Glil-Yam, Israel.

The new office will be centrally located in the central Vancouver downtown core and opens on February 1, 2020.

"With a favorable business climate and a large pool of highly-educated talent, Vancouver serves as an ideal site to help drive our continued growth," said Chen Amit, CEO and Co-Founder of Tipalti. "Vancouver also happens to be one of the world's most livable and attractive cities."

The Vancouver office will be led by Tipalti's Chief Revenue Officer, Sam Barakat, who joined in 2019 from BlackLine, Inc. As Vice President of Midmarket at BlackLine, Sam built and led BlackLine's midmarket division from the ground up.

The opening of Tipalti's third global office comes after another year of continued growth.

The company raised $76 million in a Series D round of funding led by Zeev Ventures, maintained its best-in-class customer satisfaction rating of 98%, and more than doubled new customer and business bookings during the first half of 2019. It also made both the Deloitte Fast 500 and Inc 5000 lists of America's fastest-growing businesses, for the second consecutive year. Tipalti was also recognized as a Best Place To Work in the Bay Area by the San Francisco Business Times for the third straight year.

For more information about opportunities in Vancouver, visit https://tipalti.com/join-team-tipalti-cn/.

Founded in 2010, Tipalti is the only payables automation solution to streamline all phases of the global accounts payable workflow in one holistic cloud platform. Tipalti makes it painless for finance departments to manage their entire AP and supplier payments operation. Leading companies use Tipalti to eliminate up to 80% of their supplier payments workload, helping them scale their business efficiently with global growth, while strengthening financial and tax compliance controls. Hundreds of companies trust Tipalti to transform their supplier payment operations including Roku, ClassPass, Twitter, Automattic, Amazon Twitch, GoDaddy, Postmates, Medium, Zola, Foursquare, and Vimeo.