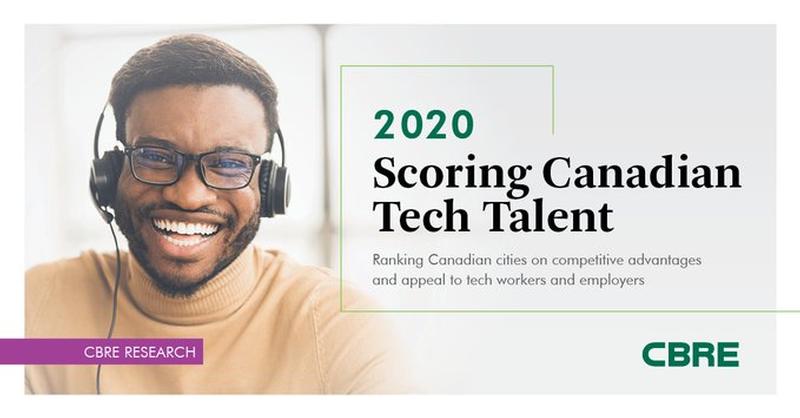 Vancouver, BC, November 20, 2020--(T-Net)--In a year of unprecedented upheaval and transformation, CBRE's new Scoring Canadian Tech Talent ranking shows that Canada's top tech markets were largely unfazed by the pandemic, with Toronto once again taking the No. 1 spot followed by Ottawa, Vancouver, Waterloo Region and Montreal.

These markets boast the strongest number of factors that contribute to tech sector success, most importantly a high concentration of tech employment. Ottawa had an 11.3% concentration of tech workers, double the Canadian average of 5.6% and the highest level among all North American cities.

Canada's largest city continues to underpin the nation's tech ecosystem. Toronto's tech job gains accounted for nearly half the tech-job growth nationwide in the past five years. The 66,900 tech jobs Toronto added in that period is enough workers to fill a 1.0 million sq. ft. office tower 10 times over.

Toronto is not the fastest-growing tech market, however. The city's 36.5% increase in tech employment over the past five years was outpaced by that of Waterloo Region and Vancouver, which posted job growth of 51.4% and 47.9%. Both cities are luring domestic and foreign tech firms at a steady clip.

The greatest upward movement in the Tech Talent rankings occurred among mid-sized markets. Halifax saw its score improve by 8 points and moved up three positions to clinch the #8 spot, the largest score improvement of any market. Saskatoon's score improved by 7.4 points to move that city to #18 in the ranking, while Calgary's score improved by 5.6 points, allowing it to hold on to the #6 spot.

Thanks to strategic positioning near the Toronto-Waterloo Innovation Corridor, London and Guelph moved up three and one positions, to #11 and #12, respectively. And Guelph, Oshawa and Hamilton punched above their weight, adding 1,900, 2,600 and 4,600 tech jobs each from 2014 to 2019. In fact, Guelph was Canada's fastest-growing tech market on a percentage basis, with 65.5% growth.

"Tech drives everything so it's great to see our major markets do well. But it is also encouraging to see tech talent pools growing in smaller cities. The more areas that are plugged into, and benefit from, the economy of tomorrow the better," said CBRE Canada Vice Chairman Paul Morassutti. "Small cities are increasingly home to dynamic local firms, including startups and well-established companies. These areas may benefit further as young talent considers leaving major markets in the wake of the pandemic and businesses embrace more remote work."

The top five Canadian Tech Talent cities are also those that produce the highest number of tech graduates. Montreal, with three of Canada's top 10 university-level computer science programs, churned out the most tech grads (4,863), followed by Toronto, Vancouver, Waterloo Region and Ottawa. Halifax, Windsor and Edmonton each had over 1,000 tech degrees awarded in 2019.

Ottawa is the nation's best-paying market for top talent, with tier-1 software developers there earning about 70% above the local industry average salary (well over $90,000 per year). The highest quality labour pools are found in Waterloo, Vancouver, Toronto and Edmonton, with Edmonton offering the highest value per dollar of wage spent.

The most affordable Tech Talent markets are Moncton, Guelph and Halifax, with the lowest estimated combined rent and wage costs ranging between $33 million and $36 million per year. With 142,000 tech workers, Montreal is the most affordable large market. The exchange rate is a significant draw for companies contemplating global expansion. Toronto, Vancouver, Montreal and Edmonton provide the best value in North America, at close to half the cost of operating in the San Francisco Bay Area.

"This year has been an especially challenging one. Though it's difficult to make any predictions for what lies ahead, Canadians can take some comfort knowing that our tech-friendly cities are positioned to thrive," said Morassutti.