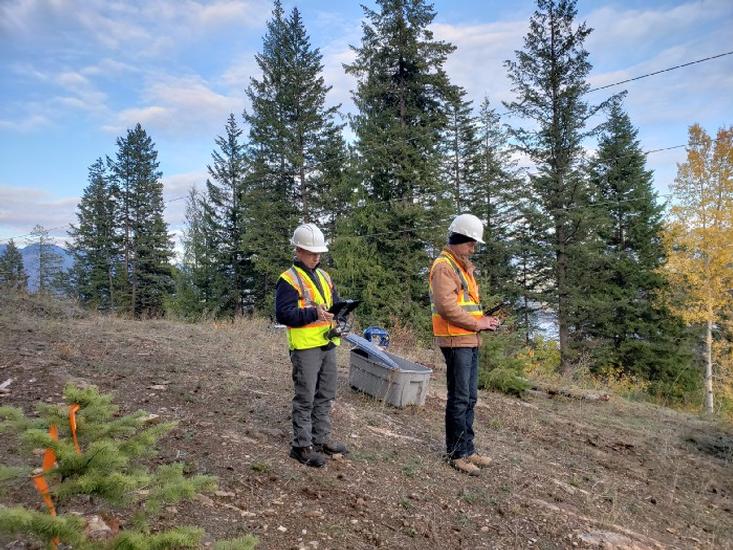 Vancouver, BC, December 14, 2020--(T-Net)--An observer standing beneath a FortisBC transmission line structure in B.C.'s southern interior this fall might have noticed a small black drone confidently approaching as it followed the power line. When it neared the structure, it would stop to hover a few metres away.

And start its dance.

Nimbly flying by each individual insulator, approaching the wooden crossarms and even inspecting the guy wires while deftly avoiding the power cables, it would finally pick up speed and dart to the next pylon to do it all over again.

Aeriosense Technologies hopes to change at least one thing about this scene: remove the observer.

The Vancouver company designs software that sends autonomous drones along electrical corridors to inspect the lines, the insulators, and all the components critical to the transmission infrastructure.

It got a robust testing this summer when it helped FortisBC inspect more than 180 kilometres of transmission line in B.C.'s central Kootenay region. This is hilly, forested, hard to access and occasionally snowy terrain that presents serious challenges to conventional inspection techniques.

But by using asset data provided by the utility, Aeriosense's artificial intelligence software constructs a unique inspection flight plan for an inquiring drone.

To comply with Transport Canada regulations that require drones to be in sight at all times, spotters kept an eye on the drones as they passed from the pilot's view. But Aeriosense believes the successful flights this summer are one more indication its autonomous drone software enables safe and reliable flights beyond visual line of sight (BVLOS).

So, no need for observers.

And very little required of the pilot. The drones travel autonomously over the Rights of Way checking for threats to the line ... such as the always encroaching forest.

"The trees grow super quickly because of the wet climate," says Executive Business Sales manager and sometime drone pilot Thomas Barter. "And if they have to go in and do some repairs they need to know what kind of access there is."

The drones also have a second mode for the close inspection of the transmission structures. Inspection software assigns the drones to points of interest and waits for the pilot to snap a still.

"Our pictures are so good we can see a missing cotter pin on a bolt. We can actually see the threads on the fixtures," says company co-founder Alex Babakov.

Pilots can then concentrate on spotting problems and not worry much about the drone since 90 per cent of the flight is controlled by Aeriosense proprietary software.

Autonomous drones save more than costs

Regular inspection of transmission lines is backbreaking. Helicopter and foot patrols are expensive, time consuming and even fatal. Just this June, three people were killed when a helicopter crashed near San Francisco while inspecting power lines for Pacific Gas and Electric.

Drones require far less money and skill to operate and Aeriosense estimates it can reduce the cost of inspections by as much as 90 percent.

Aeriosense inspection automation software allows drones to inspect multiple towers on a single mission. If pilots had to inspect each tower individually, it would be far too slow to inspect an entire transmission circuit. During the three weeks of inspections with FortisBC, Aeriosense patrolled and inspected nearly one thousand transmission structures. Drones obviously save a lot of wear and tear on a lineworker.

"It really takes the mental and hand eye coordination load off the pilot and it's a lot faster of course. They have the confidence of not crashing into the structure or the trees to fly much further than they would otherwise," says Barter.

The missions are much more efficient and wire strike is avoided," says Babakov. "If someone were to fly each tower manually, pilot fatigue would set in so our software offers several advantages over our competitors."

"About three years ago they had never seen a drone and they wanted to know what pictures they could get and how far they could fly." says Barter. "Now they want to know how this technology can complement and enhance current inspection methods."

Utilities like Fortis are still developing their drone programs. But Michael Leyland, the Manager of Innovative Initiatives at FortisBC believes the technology has a real future.

"One of the big advantages will be to inspect damage from storms or fire," says Leyland. "We had a windstorm a couple of months ago in the Kootenays causing outages for 24 hours and there were a number of structures down. To even locate where all the failures were took a long time. So having a tool like a UAV you can launch and quickly run down the right-of-way could really make an impact in terms of restoration times."

The automated drone inspections have wrapped up for the year and Fortis has an incredible resource: thousands of photos and videos all dated and geotagged; records of where and when problems occurred and where they're likely to arise. It's a vast archive it can use with its asset management software to see how quickly the lines change and how the utility keep up.

"A lot of data we capture is not only for inspection but it helps them manage the maintenance schedule: how many insulators do we need to replace, how many poles do we need, where are the poles going to be needed, this is all part of the project we're looking at," says Babakov.

Ultimately, the real benefits may be to the people at the end of the line.

"I think there are definitely efficiencies to be had to by having aerial access rather than going in by foot, "says Leyland. "We're going to save money and have better inspections by strategically employing this technology. But I think the real impact will be the improved customer service these technologies can provide."

An invasive plant known as the longspine sandbur grows on some FORTIS transmission corridors near Gilpin Grasslands Provincial park.

"Vehicles and people are not allowed on these lands because any transfer of seed underneath a truck and that species could end up somewhere else and be an issue, "says Babakov. " One of our tasks was to inspect the transmission line without having physical access."

Aeriosense drones took off outside the park boundary and performed the inspection without anyone entering the protected right of way.

"We could do an inspection which would otherwise require a foot patrol or bucket truck to get on the land. The line crews told us it would have taken 2-3 hours to power-wash their trucks to comply with the invasive species control requirements."