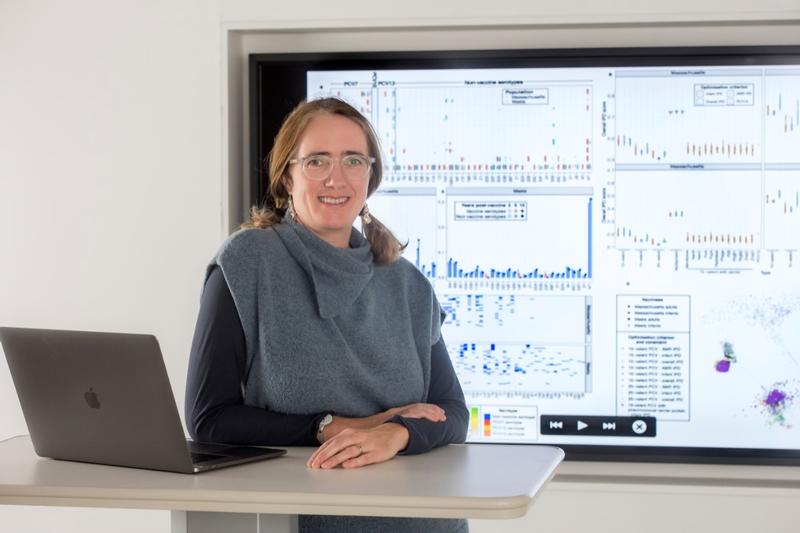 Prof. Caroline Colijn from SFU's Department of Mathematics is one of the researchers leading the study. She also holds the Canada 150 Research Chair in Mathematics for Evolution, Infection and Public Health. Some graphical descriptions of the genomic data and mathematical models used in her research can be seen in the background. Photo: Dale Northey (SFU)

Burnaby, BC, February 11, 2020--(T-Net)--The invention of vaccines for disease prevention is often cited as one of the miracles of modern medicine.

New research from Simon Fraser University suggests that tailoring vaccines based on geography and other factors could substantially reduce overall rates of bacterial disease.

Professor Caroline Colijn, who holds a Canada 150 Research Chair in Mathematics for Evolution, Infection and Public Health, is among lead researchers on the study published in Nature Microbiology.

Colijn collaborated with professor Jukka Corander of the University of Oslo and Nick Croucher from the MRC Centre for Global Infectious Disease Analysis at Imperial College London.

The trio proposes new methods for choosing the best vaccine to fight and eliminate certain bacterial strains, which could help minimize rates of pneumococcal disease, an infection that can cause serious illnesses, such as pneumonia, sepsis and bacterial meningitis.

"Designing the best vaccine is important because when we vaccinate against some strains, other strains can come in and replace those strains," says Colijn. "If new strains are as bad as the ones we have replaced through vaccinations, that can undermine our vaccination efforts."

Citing existing concerns in the medical community around the replacement of bacterial strains in vaccines, Colijn says her latest research goes a step further. Researchers propose using genomic data and mathematical modelling to design vaccines for the specific geographic location where they will be used.

The study simulated the performance of vaccines over time to assess the risk of vaccine-targeted strains being replaced by other potentially dangerous strains. Through this predictive modelling approach, the researchers identified new vaccine designs that could help reduce overall rates of disease.

"It's only recently that we have been able to do bacterial genomics on the scale that we require for this work," says Colijn. "This was made possible by our ability to combine sequencing technologies with computational modelling in a new way."

These data modelling methods, when applied to pneumococcus, also help identify which options are best for minimizing disease in different age groups, or reducing the frequency of antibiotic resistant-infections.

Researchers are already considering whether these findings could be applied to other bacterial pathogens such as E. coli.

Both Corander and Croucher are also Associate Faculty at the Wellcome Sanger Institute, which could play a pivotal role in accelerating future vaccine discovery and design using these techniques.

According to ImmunizeBC, vaccines have saved more lives in Canada than any other medical intervention in the past 50 years.

The World Health Organization estimates that vaccines prevented at least 10 million deaths between 2010 and 2015, and many millions more lives were protected from illness by them.