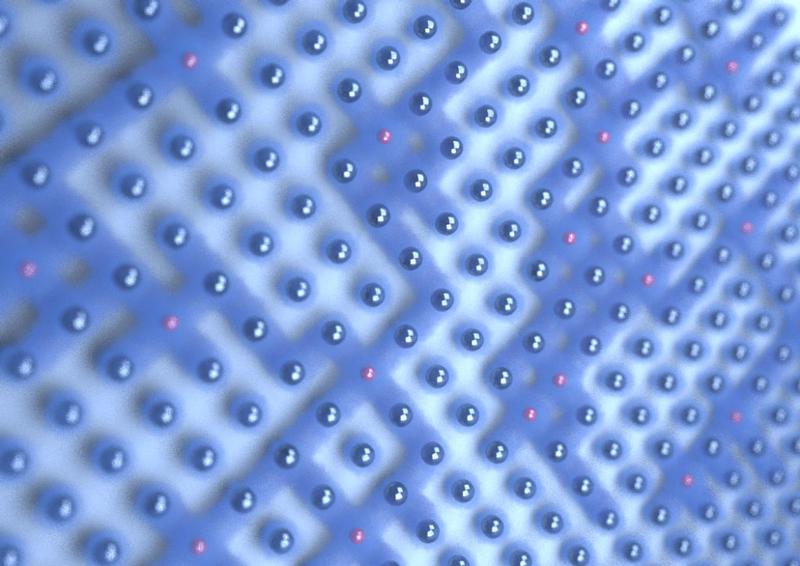 Artist's impression of the dissolving of the electronic "traffic jam." The red atoms are different in their quantum nature and allow transport of electrons in their surroundings. Credit: SBQMI

Vancouver, BC, February 3, 2020--(T-Net)--Most modern electronic devices rely on tiny, finely-tuned electrical currents to process and store information. These currents dictate how fast our computers run, how regularly our pacemakers tick and how securely our money is stored in the bank.

In a study published in Nature Physics, researchers at the University of British Columbia have demonstrated an entirely new way to precisely control such electrical currents by leveraging the interaction between an electron's spin (which is the quantum magnetic field it inherently carries) and its orbital rotation around the nucleus.

"We have found a new way to switch the electrical conduction in materials from on to off," said lead author Berend Zwartsenberg, a Ph.D. student at UBC's Stewart Blusson Quantum Matter Institute (SBQMI). "Not only does this exciting result extend our understanding of how electrical conduction works, it will help us further explore known properties such as conductivity, magnetism and superconductivity, and discover new ones that could be important for quantum computing, data storage and energy applications."

Flipping the switch on metal-insulator transitions

Broadly, all materials can be categorized as metals or insulators, depending on the ability of electrons to move through the material and conduct electricity.

However, not all insulators are created equally. In simple materials, the difference between metallic and insulating behavior stems from the number of electrons present: an odd number for metals, and an even number for insulators. In more complex materials, like so-called Mott insulators, the electrons interact with each other in different ways, with a delicate balance determining their electrical conduction.

In a Mott insulator, electrostatic repulsion prevents the electrons from getting too close to one another, which creates a traffic jam and limits the free flow of electrons. Until now, there were two known ways to free up the traffic jam: by reducing the strength of the repulsive interaction between electrons, or by changing the number of electrons.

The SBQMI team explored a third possibility: was there a way to alter the very quantum nature of the material to enable a metal-insulator transition to occur?

Using a technique called angle-resolved photoemission spectroscopy, the team examined the Mott insulator Sr2IrO4, monitoring the number of electrons, their electrostatic repulsion, and finally the interaction between the electron spin and its orbital rotation.

"We found that coupling the spin to the orbital angular momentum slows the electrons down to such an extent that they become sensitive to one another's presence, solidifying the traffic jam." said Zwartsenberg. "Reducing spin-orbit coupling in turn eases the traffic jam and we were able to demonstrate a transition from an insulator to a metal for the first time using this strategy."

"This is a really exciting result at the fundamental physics level, and expands the potential of modern electronics," said co-author Andrea Damascelli, principal investigator and scientific director of SBQMI. "If we can develop a microscopic understanding of these phases of quantum matter and their emergent electronic phenomena, we can exploit them by engineering quantum materials atom-by-atom for new electronic, magnetic and sensing applications."