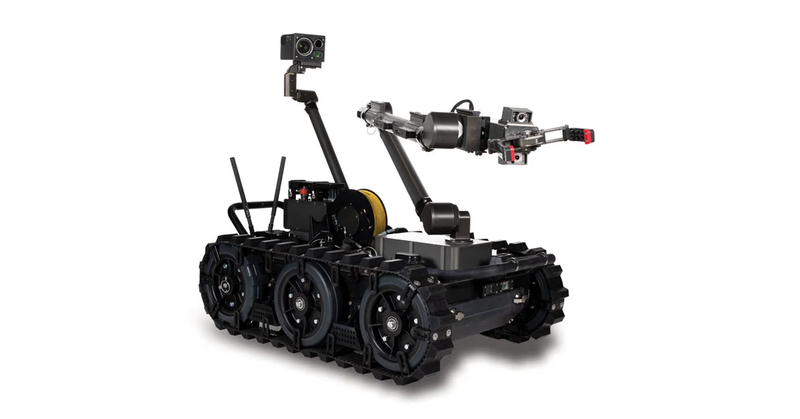 Earlier this month FLIR announced the U.S Air Force has ordered almost 200 Centaurs through a $23 million contract. Marine Corps Explosive Ordnance Disposal (EOD) teams will use the FLIR Centaur to assist in disarming improvised explosive devices (IEDs), unexploded ordnance, and similar hazardous tasks. Different sensors and payloads can be added to support a range of missions.

"Centaur gives the Marines a multipurpose, mid-sized UGV that will complement the FLIR PackBot, SUGV and FirstLook robots we continue to provide to the Corps," said David Ray, president of the Government & Defense Technologies business at FLIR. "We're honored the Air Force and now Marines are choosing Centaur as an EOD platform-of-choice, and pleased the U.S. Army MTRS Inc II program can serve as a procurement channel."

In 2017, the U.S. Army chose Endeavor Robotics, acquired a year ago by FLIR, as its medium-sized robot provider for MTRS Inc II. The company designed the all-new Centaur as its MTRS solution. FLIR is delivering robots to the Army under that multi-year program of record, which upon award was valued at more than $150 million, including options. This latest order falls under the current ceiling.

Centaur is a medium-sized UGV that provides a standoff capability to detect, confirm, identify, and dispose of hazards. Weighing roughly 160 pounds, the open-architecture robot features an advanced EO/IR camera suite, a manipulator arm that reaches over six feet, and the ability to climb stairs. Modular payloads can be used for CBRNE detection and other missions.

Deliveries are expected to begin in the third quarter of 2020. For more on FLIR Systems' Unmanned Ground Systems platforms, visit www.flir.com/UIS/UGS.

The statements in this release by David Ray and the other statements in this release about the contract and order described above are forward-looking statements within the meaning of the Private Securities Litigation Reform Act of 1995. Such statements are based on current expectations, estimates, and projections about FLIR's business based, in part, on assumptions made by management. These statements are not guarantees of future performance and involve risks and uncertainties that are difficult to predict. Therefore, actual outcomes and results may differ materially from what is expressed or forecasted in such forward-looking statements due to numerous factors, including the following: the ability to manufacture and deliver the systems referenced in this release, changes in pricing of FLIR's products, changing demand for FLIR's products, product mix, the impact of competitive products and pricing, constraints on supplies of critical components, excess or shortage of production capacity, the ability of FLIR to manufacture and ship products in a timely manner, FLIR's continuing compliance with U.S. export control laws and regulations, and other risks discussed from time to time in FLIR's Securities and Exchange Commission filings and reports. In addition, such statements could be affected by general industry and market conditions and growth rates, and general domestic and international economic conditions. Such forward-looking statements speak only as of the date on which they are made and FLIR does not undertake any obligation to update any forward-looking statement to reflect events or circumstances after the date of this release, or for changes made to this document by wire services or Internet service providers.