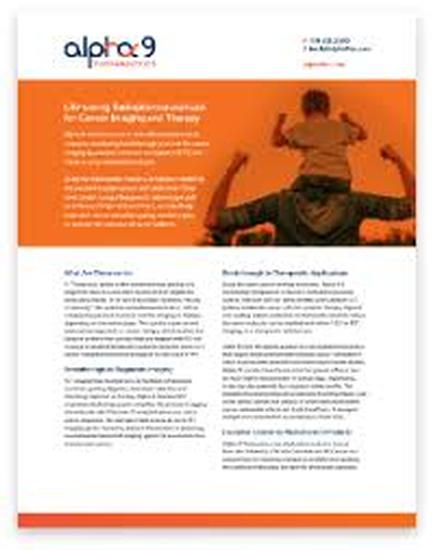 Vancouver, BC, June 8, 2020--(T-Net)--Alpha-9 Theranostics Inc. today announced that it has appointed two senior independent Non-Executive Directors to its Board.

Ian McBeath, Chief Executive Officer for Alpha-9 Theranostics said; "We are excited to have attracted and appointed two very experienced executives to our Board. Simon brings to us his expertise in founding a successful biopharmaceutical company and taking it through to a public listing. Michael will provide his expertise in managing an international med-tech company and his experience in running a radiopharmaceutical-based imaging business. Both will play an active role as we seek to grow our Company and bring to market our unique cancer imaging and therapeutic products."

Alpha-9 Theranostics is a clinical stage, radiopharmaceutical company based in Vancouver using molecularly targeted radiotherapy for the improved diagnosis and treatment of metastatic cancer. The Company is developing new theranostic products based on breakthrough technology developed by the scientific founders and exclusively licensed from the University of British Columbia and BC Cancer.

Alpha-9's first therapeutic product is a new radiopharmaceutical that targets advanced metastatic prostate cancer with the aim of achieving greater efficacy and an improved safety profile over first-generation products that are currently in clinical trials.

The Company is also developing a unique theranostic approach, where the same cancer seeking molecule can either be labelled with Fluorine-18 for PET imaging, or with a particle-emitting radioisotope to destroy cancer cells that have metastasized.

Molecularly targeted radiotherapy can precisely deliver a therapeutic radionuclide directly to a cancer cell with minimal impact on healthy tissue. This offers new hope for cancer patients whose disease has metastasized to vital organs, where surgery is not an option and use of systemic cancer drugs produces intolerable side-effects.

This news release contains certain forward-looking statements. Actual results may differ materially from the statements made as a result of various factors, including, but not limited to, the inherent risks associated with drug research and development, difficulties or delays in development testing, changes in regulatory affairs, lack of therapeutic efficacy, unacceptable side-effects, the dependence on partners, the inability to raise sufficient finance, the appearance of competitors and other risks generally associated with the biopharmaceutical industry.