Vancouver, BC, July 9, 2020--(T-Net)--Vancouver-based CTO.ai says its mission has been to make DevOps accessible to the next 40 million developers and as part of that they have always planned to bring developer tools to where collaboration and communication happens.

This has become more pressing as the world accelerates towards the future: remote workforces.

CTO.ai announced that it has taken the next step towards this mission by officially announcing that The Ops Platform is now available in the Slack App Directory so anyone can easily automate a DevOps workflow. 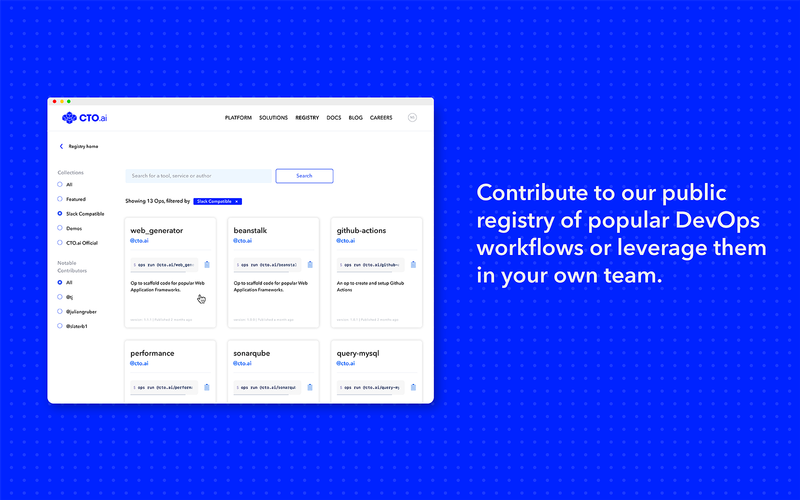 As the first of its kind, the CTO.ai Slack App is designed to make DevOps more accessible than ever before by reimagining ChatOps in Slack, via "SlackOps" - the easiest way to build out developer workflows in CLI + Slack.

Slack was the natural choice when it came to deciding what platform CTO.ai would support next. As remote work becomes the new normal, Slack has increased its user base by 25% since March 2020. At 12.5 million users, Slack is the place where remote collaboration is happening and CTO.ai looks to bridge the gap by bringing DevOps teams into a SlackOps framework.

With the CTO.ai platform, it's easy to implement SlackOps for a team. Their registry offers many out of the box SlackOps workflows that a team can use from anywhere— even on mobile!

The company says they are currently in Beta and working with their community to 'build the world's most vibrant community of developers who are contributing to this registry'.

Join their Community and sign up for our Beta to bring Slack Native Serverless DevOps to your team.