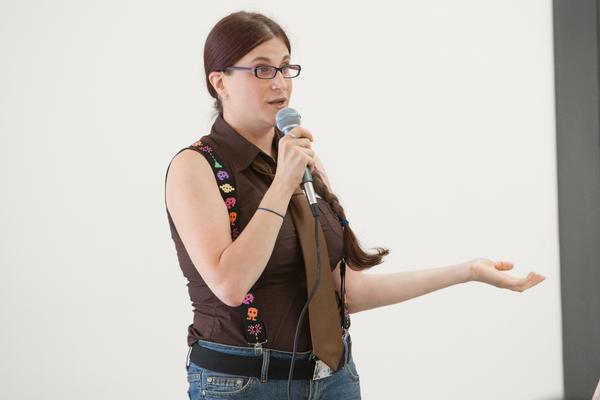 Vancouver, BC, August 14, 2020--(T-Net)--Internationally-recognized entrepreneur, diversity trainer, and Okanagan resident Jill Binder has been nominated for the 2020 BraveIT Award, a technology honour that acknowledges Bravery in IT.

Binder trains people from underrepresented and marginalized groups around the world to become inspiring speakers and leaders in their companies. She also helps technology conferences and companies get more speaker diversity on their stages and, ultimately, in their leadership.

According to Binder, the award is a huge honour because the final four candidates were nominated by their peers. The winner will be selected by online voting from now until August 28, 2020.

"I was very excited when I heard the news that I was nominated for the BraveIT Award," said Binder from her home in Downtown Vernon. "I am honoured that my hard work empowering people around the world is being recognized, and I am just getting started!"

Jill first recognized the need to support diverse tech speakers in 2013 when she became a co-organizer of a tech conference. In her first year in the role, their final speaker lineup had only 14 per cent diversity representation. There are many things that caused this, but one reason that kept coming up when Jill asked people from marginalized or underrepresented groups to apply to speak was their Impostor Syndrome. They mistakenly felt like they didn't know enough to be able to give a talk.

"I was inspired to help diverse speakers like me find their expertise and their voice," explained Binder. "I led a team that created a new workshop that helps people bust through Impostor Syndrome, find a topic to share with our communities, and start giving talks. The workshop was an immediate success. The following year, our conference had three times the number of diverse applicants and fully 50 per cent speaker diversity."

Since 2018, Jill and her teams have helped 40 conferences in 4 technology communities and over 350 people from marginalized or underrepresented groups in 35 countries with her diverse speaker training programs. She was honoured as a Featured Person on WordPress.org in 2019, named one of the top 100 Influencers of WordPress in 2014 by Torque Magazine, and listed one of the top 10 Women of WordPress by CloudWays.

"I would love to be voted the 2020 BraveIT Award winner, but I need some help," said Jill. I encourage anyone who wants to hear a wider variety of voices in the world of tech and to encourage diversity in these sectors to please vote for me. Plus I will get to choose a deserving non-profit to be awarded $10,000, which I would love to do as well."

Voting for the 2020 BraveIT Awards is online at web.tierpoint.com/braveit-award-2020-vote. This is the third annual BraveIT Award, which will be awarded in September at the virtual BraveIT conference. BraveIT is an annual thought-leadership and networking conference hosted by IT-solutions company TierPoint. thought leadership and networking event designed for the modern IT professional.