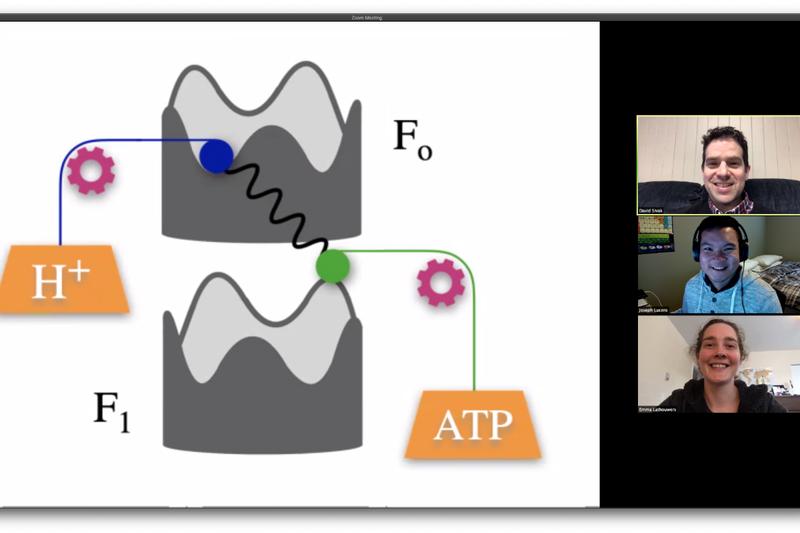 Burnaby, BC, August 14, 2020--(T-Net)--Converting energy quickly and efficiently is critical to both human-engineered machinery, and to the microscopic machinery operating in the human body.

Now, SFU researchers in the Department of Physics have discovered a key design principle from the human body that could help in the development of faster man-made nanomachines.

"All living things use the molecule adenosine triphosphate (ATP) as an energy carrier," says grad student, Joseph Lucero, who co-authored the research team's recent paper published in the Journal of Physical Chemistry Letters.

"ATP synthase is the crucial molecular motor at the end of the metabolic reaction chain that turns the food that we eat into a portable fuel that the cells in our bodies can use."

He explains that this tiny nanomachine (1/1000th the width of a strand of hair) powers many other cellular processes by spinning hundreds of times per second, making hundreds of ATP molecules in that time.

The researchers became interested in ATP synthase because of its central role in life and the possibility of using insights from its operation in novel nanotechnology. This led them to develop a simple theoretical model of ATP synthase that zeroes in on how the coupling between nanomachine components affects the function. They were surprised to find that, unlike in human-scale machines, looser, floppier connections led to the greatest power output.

"Nanoscale machines are so small that friction slows them down incredibly quickly," says the study's lead author, Emma Lathouwers. "Where a human in a swimming pool can coast several times their body length, a nanoscale machine cannot even coast the length of an atom. To propel themselves forward," she says, "these tiny objects require random kicks from surrounding molecules."

The researchers found that when nanometer-sized machine components are loosely coupled, one part of the machine can be kicked forward at a time, requiring smaller kicks (that occur more often), thereby increasing the nanoscale machine's speed.

Senior author David Sivak, a professor and Tier 2 Canada Research Chair, says, "Despite biological machines being composed of radically different materials and assembled according to different blueprints than human-engineered machines, we hope to apply these design principles to guide the development of new machines."

Sivak says this discovery could be used, for example, to guide the development of artificial photosynthetic materials that can more quickly and efficiently transform sunlight into renewable energy.