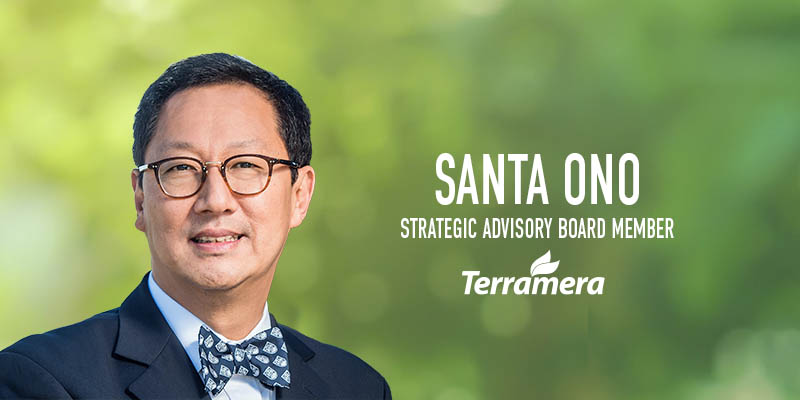 Vancouver, BC, August 24, 2020--(T-Net)--Terramera, a global agtech leader fusing science, nature and artificial intelligence to transform how food is grown and the economics of agriculture, today announced that Dr. Santa Ono, President and Vice-Chancellor of the University of British Columbia (UBC), has joined its Strategic Advisory Board.

Ono is an internationally renowned biologist and professor of medicine who has held positions at numerous prestigious universities including Harvard, Johns Hopkins and University College London. While president of the University of Cincinnati, Inside Higher Education named Ono America's most notable university president and Upworthy celebrated him as one of nine global CEOs exemplifying "servant leadership."

As part of Terramera's Strategic Advisory Board, Ono will advise on short and long-term business strategies alongside Greg D'Avignon, Stewart Beck and Nancy Roman. Together, the Board provides a wealth of perspectives to help scale Terramera's technology globally.

"As a molecular biologist and someone who has advised both start-up and Fortune 500 companies, I am blown away by Terramera's vision and the quality of the leadership within the organization," said Ono. "Terramera is at the cutting edge of agriculture, using the latest technologies in artificial intelligence and machine learning. I believe in Terramera's goals and am excited to do everything I can to support its growth to be one of the world's great companies in this sector."

"Terramera is creating game-changing technologies to solve some of the world's biggest problems and that requires bringing the best minds together," said Karn Manhas, Terramera Founder and CEO. "In addition to being a globally recognized leader, Santa's experience advising companies of all sizes paired with his background in biology make him the perfect partner in our mission to reduce pesticide loads 80 percent."

UBC and Terramera have a strong history of project collaboration, including:

Terramera is a global agtech leader fusing science, nature and artificial intelligence to transform how food is grown and the economics of agriculture in the next decade. With its revolutionary Actigate™ technology platform, which was recognized by Fast Company as a 2020 World Changing Idea, Terramera is committed to reducing the global synthetic pesticide load 80% by 2030 to protect plant and human health and ensure an earth that thrives and provides for everyone.

The privately-held, venture-backed company was founded in 2010 and has grown to include a world-class bench of engineers, scientists, advisors and investors. Terramera is headquartered in Vancouver, British Columbia, with integrated operations in Canada, the US and India that include research labs, a greenhouse and farm, and more than 240 patents in its global IP portfolio. For more information, please visit terramera.com