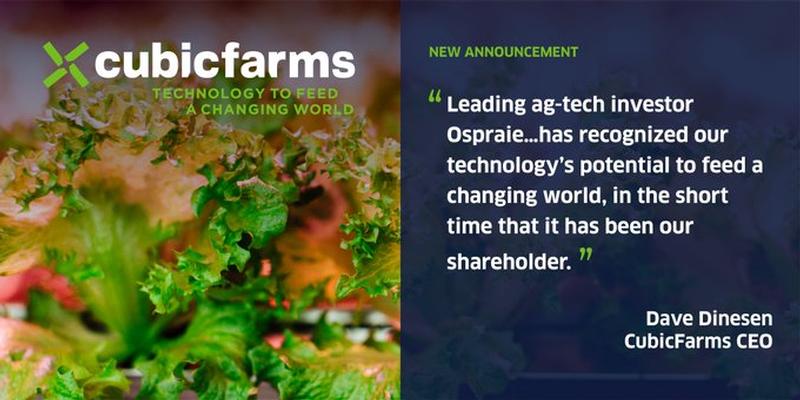 In carrying out the Transaction, Ospraie relied on the exemption from the take-over bid requirements of applicable securities law that is set out in section 4.2 of National Instrument 62-104 - Take-Over Bids and Issuer Bids.

"We are pleased that leading ag-tech investor Ospraie, whom we welcomed as our strategic investor through a $5 million private placement in May, has recognized our technology's potential to feed a changing world, in the short time that it has been our shareholder," said CubicFarms CEO Dave Dinesen.

"In order for Ospraie to increase its shareholding in CubicFarms without triggering a takeover bid - which our management and board would not support - an agreement was reached through a non-dilutive, private transaction with a few large founding shareholders, who agreed to reduce their personal holdings to enable the long term, material ownership by Ospraie. The $0.70 per share purchase price was negotiated at market price many weeks ago and all parties agreed to honour the agreement despite it being currently lower than market. Ospraie's deep industry and commercial expertise, in addition to its extensive network, have already added much value to CubicFarms. We look forward to the continued close relationship with our long-term strategic investor, and working together to unlock new potential synergies with other companies in its portfolio."

CubicFarm Systems Corp. is a technology company that is developing and deploying technology to feed a changing world. Its proprietary technologies enable growers around the world to produce high-quality, predictable crop yields. CubicFarms has two distinct technologies that address two distinct markets. The first technology is its patented CubicFarm™ System, which contains patented technology for growing leafy greens and other crops. Using its unique, undulating-path growing system, the Company addresses the main challenges within the indoor farming industry by significantly reducing the need for physical labour and energy, and maximizing yield per cubic foot. CubicFarms leverages its patented technology by operating its own R&D facility in Pitt Meadows, British Columbia, selling the System to growers, licensing its technology and providing vertical farming expertise to its customers.

The second technology is CubicFarms' HydroGreen System for growing nutritious livestock feed. This system utilizes a unique process to sprout grains, such as barley and wheat, in a controlled environment with minimal use of land, labour and water. The HydroGreen System is fully automated and performs all growing functions including seeding, watering, lighting, harvesting, and re-seeding - all with the push of a button - to deliver nutritious livestock feed without the typical investment in fertilizer, chemicals, fuel, field equipment and transportation. The HydroGreen System not only provides superior nutritious feed to benefit the animal, but also enables significant environmental benefits to the farm.

This press release does not constitute an offer to sell or the solicitation of an offer to buy, nor shall there be any sale of these securities, in any jurisdiction in which such offer, solicitation or sale would be unlawful prior to registration or qualification under the securities laws of such jurisdiction. The securities have not been and will not be registered under the United States Securities Act of 1933, as amended (the "U.S. Securities Act"), or any state securities laws, and may not be offered or sold within the United States unless an exemption from such registration is available.

Certain statements in this release constitute "forward-looking statements" or "forward-looking information" within the meaning of applicable securities laws, including, without limitation, statements with respect to the potential synergies with Ospraie portfolio companies. Such statements involve known and unknown risks, uncertainties, and other factors which may cause the actual results, performance, or achievements of CubicFarm Systems Corp., or industry results, to be materially different from any future results, performance, or achievements expressed or implied by such forward-looking statements or information including the Company obtaining the approval of the Offering from the TSX Venture Exchange. Such statements can be identified by the use of words such as "may", "would", "could", "will", "intend", "expect", "believe", "plan", "anticipate", "estimate", "scheduled", "forecast", "predict", and other similar terminology, or state that certain actions, events, or results "may", "could", "would", "might", or "will" be taken, occur, or be achieved.

These statements reflect the Company's current expectations regarding future events, performance, and results and speak only as of the date of this news release. Consequently, there can be no assurances that such statements will prove to be accurate and actual results and future events could differ materially from those anticipated in such statements. Except as required by securities disclosure laws and regulations applicable to the Company, the Company undertakes no obligation to update these forward-looking statements if the Company's expectations regarding future events, performance, or results change.