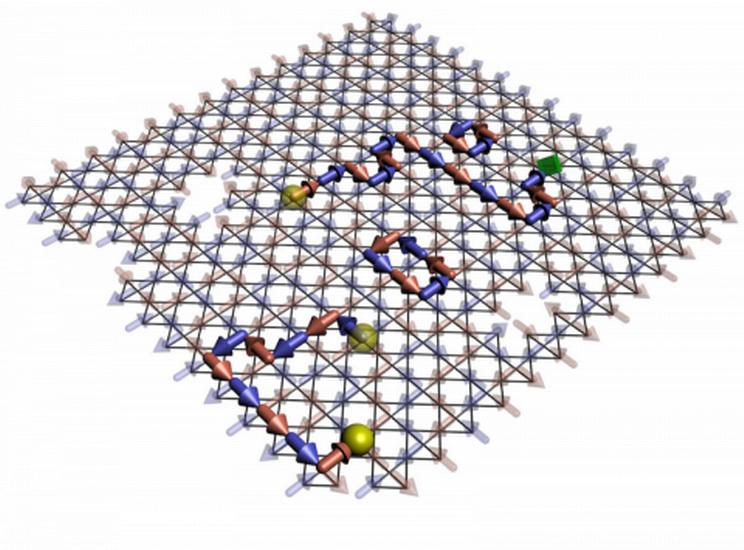 Burnaby, BC, July 30, 2021--(T-Net)--Using a D-Wave quantum-annealing computer as a testbed, scientists at Los Alamos National Laboratory have shown that it is possible to isolate so-called emergent magnetic monopoles, a class of quasiparticles, creating a new approach to developing "materials by design."

"We wanted to study emergent magnetic monopoles by exploiting the collective dynamics of qubits," said Cristiano Nisoli, a lead Los Alamos author of the study. "Magnetic monopoles, as elementary particles with only one magnetic pole, have been hypothesized by many, and famously by Dirac, but have proved elusive so far."

They realized an artificial spin ice by using the superconducting qubits of the quantum machine as a magnetic building block. Generating magnetic materials with exotic properties in this way is ground-breaking in many ways. Their process used Gauss's law to trap monopoles, allowing the scientists to observe their quantum-activated dynamics and their mutual interaction. This work demonstrates unambiguously that magnetic monopoles not only can emerge from an underlying spin structure, but can be controlled, isolated and studied precisely.

"It was shown in the last decade or so that monopoles can emerge as quasiparticles to describe the excitation spin ices of various geometries. Previously, the National High Magnetic Field Laboratory's Pulsed Field Facility here at Los Alamos was able to 'listen' to monopole noise in artificial spin ices. And now, utilizing a D-Wave quantum annealing system, we have enough control to actually trap one or more of these particles and study them individually. We saw them walking around, getting pinned down, and being created and annihilated in pairs of opposite magnetic charge. And we could thus confirm our quantitative theoretical predictions, that they interact and in fact screen each other," said Nisoli.

"D-Wave's processors are designed to excel in optimization, but can also be used as quantum simulators. By programming the desired interactions of our magnetic material into D-Wave's qubits, we can perform experiments that are otherwise extremely difficult," said Andrew King, director of Performance Research at D-Wave and an author on the paper. "This collaborative, proof-of-principle work demonstrates new experimental capabilities, improving the power and versatility of artificial spin ice studies. The ability to programmatically manipulate emergent quasiparticles may become a key aspect to materials engineering and even topological quantum computing; we hope it will be foundational for future research."

Nisoli added, "We have only scratched the surface of this approach. Previous artificial spin ice systems were realized with nanomagnets, and they obeyed classical physics. This realization is instead fully quantum. To avoid leapfrogging we concentrated so far on a quasi-classical study, but in the future, we can really crank up those quantum fluctuations, and investigate very timely issues of decoherence, memory, quantum information, and topological order, with significant technological implications."

"These results also have technological consequences particularly relevant to DOE and Los Alamos, specifically in the idea of materials-by-design, to produce future nanomagnets that might show advanced and desirable functionality for sensing and computation. Monopoles, as binary information carriers, can be relevant to spintronics. They also contribute significantly to Los Alamos D-Wave investments," noted Alejandro Lopez-Benzanilla of Los Alamos, who works on the D-Wave processor and assembled the team.

Nisoli, moreover, suggests that beside fruitful applications, these results could perhaps also provide food for thought to fundamental physics:

"Our fundamental theories of particles are parametrized models. One wonders: what is a particle? We show here experimentally that not only particles but also their long-range interactions can be a higher-level description of a very simple underlying structure, one only coupled at nearest-neighbors. Could even 'real' particles and interactions that we consider fundamental, such as leptons and quarks, instead be construed as an emergent, higher-level description of a more complex lower-level binary substratum, much like our monopoles emerging from a bunch of qubits?"

The funding: This project was funded under a Los Alamos National Laboratory Directed Research grant.

D-Wave is the leader in the development and delivery of quantum computing systems, software and services and is the world's first commercial supplier of quantum computers. Our mission is to unlock the power of quantum computing for the world. We do this by delivering customer value with practical quantum applications for problems as diverse as logistics, artificial intelligence, materials sciences, drug discovery, scheduling, cybersecurity, fault detection, and financial modeling. D-Wave's systems are being used by some of the world's most advanced organizations, including NEC, Volkswagen, DENSO, Lockheed Martin, USRA, USC, and Los Alamos National Laboratory. With headquarters near Vancouver, Canada, D-Wave's US operations are based in Palo Alto, CA. D-Wave has a blue-chip investor base including PSP Investments, Goldman Sachs, BDC Capital, NEC Corp., and In-Q-Tel. For more information, visit: www.dwavesys.com.