Income from digital currency mining was $66.7 million this fiscal year, a 174% increase from the prior year. 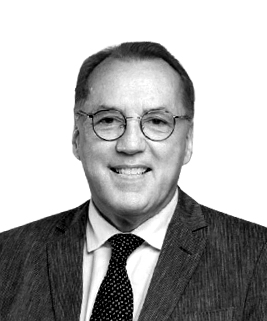 "Fiscal 2021 was an incredible year for HIVE. Despite the effects of COVID-19 we have achieved record results and continued to increase our Ethereum and Bitcoin mining capacity," said Frank Holmes, Interim Executive Chairman of HIVE.

"During the fiscal year, we assumed direct responsibility for all our cryptocurrency mining operations from our former strategic partner and continued to see significant reductions in the overhead of these operations, which included our Ethereum mining facility in Iceland. During the COVID-19 pandemic we completed the acquisition of Cryptologic Corp. in April 2020, giving us a substantial Bitcoin cloud mining operation, in Quebec, Canada. We have continued to expand our capacity at this facility through the purchase and installation of next generation Bitcoin mining equipment.

"Our focus on Ethereum mining in Sweden and Iceland continues to be strong as we spent substantial time and capital in upgrading the majority of our GPU memory cards from 4 giga-bytes to 8 giga-bytes to continue to remain profitable when the DAG file increased. We also undertook a corporate restructuring in Sweden to become a Data Centre business with a long term HPC strategy while remaining true to our roots as an Ethereum miner.

"Going forward, our focus is on improving efficiency and profitability across our mining operations by optimizing cryptocurrency mining output, continuing to lower costs, and maximizing our existing electrical and infrastructure capacity by installing new mining equipment as quickly as possible to leverage our fixed cost base and improve future mining margins.

"This expansion and capital spending has been partially facilitated by the $100 million At-The-Market Program that we commenced in the last quarter of the year. This has allowed us to HODL 25,000 ETH and purchase new ASIC machines to expand and mine Bitcoin to HODL.

"As it relates to our industry, Ethereum market conditions for miners improved significantly over the last year, driven by price increases and the adoption of the network for decentralized finance applications. Bitcoin mining conditions have also improved with strong price increase since the halving on May 11, 2020, the date when HIVE started mining with new generation miners at its facility in Quebec. We continue to believe we are well positioned to benefit from the continued adoption of Ethereum and Bitcoin globally."

For the fiscal year ended March 31, 2021, income from digital currency mining was $66.7 million, an increase of approximately 128% from the prior year primarily due to an increase in the production of Ethereum and Bitcoin stemming from mining expansion, and considerably higher coin prices compared to the prior year.

The improvement was primarily due to the Company's assumption of control over its operations in Sweden during fiscal 2020, which has resulted in a lower cost of operations than under the Company's previous service provider agreement, combined with the cessation of Bitcoin cloud mining operations after they became unprofitable in the third quarter of fiscal 2020, and the switch to independent mining at our bitcoin mining facility in Quebec.

Net income during fiscal 2021 was $42.5 million, or $0.12 per share, compared to a net loss of $1.7 million, or loss of $0.01 per share, in fiscal 2020. The improvement was driven primarily by the improvement in gross mining margin1, higher Ethereum and Bitcoin prices, gains on the sale of digital currencies, and foreign exchange. 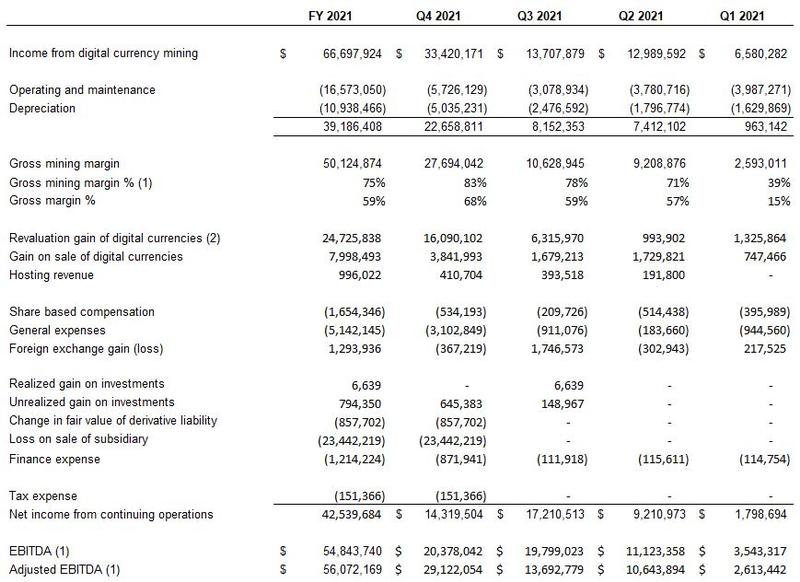 ­The Company's Consolidated Financial Statements and Management's Discussion and Analysis (MD&A) thereon for the three months and year ended March 31, 2021 will be accessible on SEDAR at www.sedar.com under HIVE's profile and on the Company's website at www.HIVEblockchain.com.

Except for the statements of historical fact, this news release contains "forward-looking information" within the meaning of the applicable Canadian securities legislation that is based on expectations, estimates and projections as at the date of this news release. "Forward-looking information" in this news release includes information about restructuring of the Company's operations and sustainable future profitability; potential further improvements to the profitability and efficiency across mining operations by optimizing cryptocurrency mining output, continuing to lower direct mining operations cost structure, and maximizing existing electrical and infrastructure capacity including with new mining equipment in existing facilities; continued adoption of Ethereum and Bitcoin globally; the potential for the Company's long term growth; the business goals and objectives of the Company, and other forward-looking information includes but is not limited to information concerning the intentions, plans and future actions of the parties to the transactions described herein and the terms thereon.

This news release also contains "financial outlook" in the form of gross mining margins, which is intended to provide additional information only and may not be an appropriate or accurate prediction of future performance, and should not be used as such. The gross mining margins disclosed in this news release are based on the assumptions disclosed in this news release and the Company's Management Discussion and Analysis for the fiscal year ended March 31, 2021, which assumptions are based upon management's best estimates but are inherently speculative and there is no guarantee that such assumptions and estimates will prove to be correct.