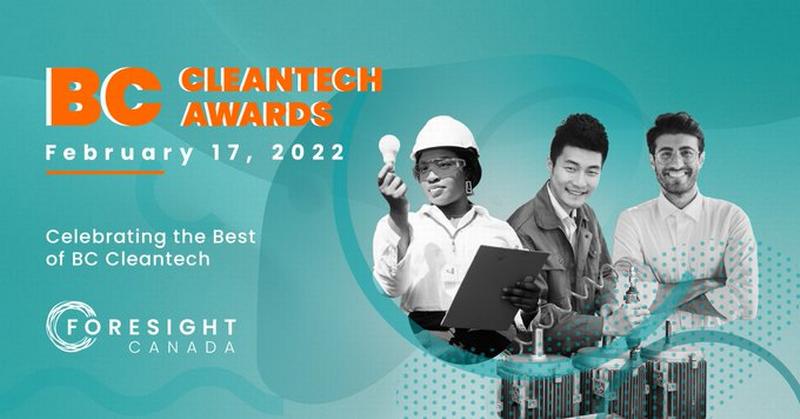 Who's making the biggest difference in cleantech in British Columbia? We want names!

Burnaby, BC, January 10, 2022--(T-Net)--Foresight announced that nominations are now open for their annual BC Cleantech Awards.

Foresight's annual BC Cleantech Awards help recognize the people and organizations who are creating and advancing climate innovations.

This year they have 10 award categories. All entries will be evaluated by an independent panel of judges, and finalists will be announced on February 3.

You can nominate yourself, a colleague, or an individual or organization that inspires you. Nominations are open until Jan. 28.

Watch live as they reveal the winners for the BC Cleantech Awards 2022 on February 17.

Industry Icon Award
Cleantech CEO
Someone who has made a significant impact and is changing the world of cleantech.

Ecosystem Builder
Industry / Association
An influential connector who lifts up others through introductions and networking.

Policy Maker Award
Government Champion
A self proclaimed leader in government who's working hard to move us forward on the path to net zero.

Top Educator Award
Professor or Instructor
Someone who is taking an innovative and leading approach to education in cleantech.

Transformation Advocate Award
Industry
An early-adopting organization that uses their power and influence to move the province toward a sustainable future.

Community Impact Award
Association
An organization that is contributing to the region's liveability through their support of cleantech.

Educational Institution Award
University
A powerhouse of educational excellence that is championing the cleantech future.

Innovation Funder Award
Investor
An impact investor or funder that is making a difference by investing in the clean economy.

Nominate now, and read about the 2021 BC Cleantech Award winners.