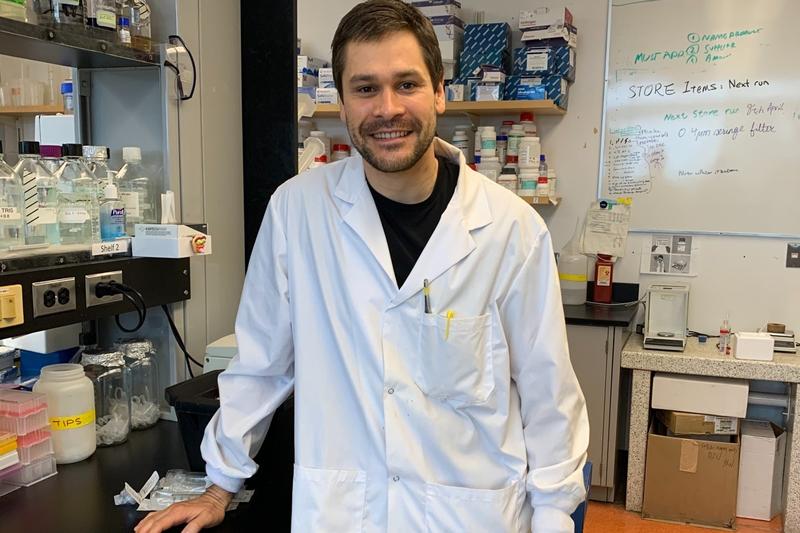 Burnaby, BC, October 17, 2022--(T-Net)--Biochemist Dustin King is weaving an Indigenous worldview into western science through his role in leading a new laboratory at Simon Fraser University.

His father instilled in him a deep respect for nature from an early age, growing up in a remote northern community near Burns Lake, BC. King, who is half Ojibwe, combines this respect for nature with a passion for biochemistry, embodying Indigenous teachings of interconnectedness and sustainability in his work.

"In our culture, we're taught to think about the planet seven generations into the future. This means trying to live in a sustainable way that preserves the planet for our children," he says. "This perspective influences what we study and how we apply our science - to try and live on this planet in a more sustainable way."

King joined SFU in July 2022 as an assistant professor of molecular biology & biochemistry. Research conducted by the King Laboratory will focus on how organisms sense and respond to carbon dioxide (CO2), work that can have a critical impact in this era of climate change.

One of his lab's goals is to find ways to reduce CO2 emissions by studying how organisms capture and trap CO2 from the atmosphere. His lab is particularly interested in photosynthetic bacteria called cyanobacteria, also known as blue-green algae, which engage in a natural form of carbon capture and storage.

"We're trying to pick apart the detailed biochemical mechanisms through which this process occurs so that perhaps we can engineer organisms to be more efficient at capturing CO2 and help reduce our emissions," he explains.

Journey from student to professor

A curiosity about nature operating at the microscopic level, beyond what we can see and interact with directly, motivated him to study biochemical sciences.

The turning point in his career journey occurred during his second-year as an undergraduate student at the University of Northern British Columbia in Prince George. He was inspired by a guest lecture from professor Chow Lee, which ended with an open call for interested students to work in his lab. Under Lee's guidance, any doubts King had about whether he would become a successful scientist faded.

He is currently recruiting students and research assistants to work in the King Laboratory, recognizing that in many ways, things have come full circle from where he began.

"It's quite a unique feeling because I can put myself back in that position of being a student interested in the science and never would have imagined I'd get to this stage where now I'm a professor," he says "It's really been my career goal for the longest time because I'm just fascinated by this research."

King believes STEM (Science, Technology, Engineering and Math) fields can be made more accommodating and respectful to Indigenous students and their perspectives to encourage more Indigenous youth to pursue careers in these areas.

Another important step is to form partnerships with Indigenous communities and demonstrate how STEM disciplines are a worthwhile pursuit to advance their communities and culture.

King says it's important to acknowledge the history of Indigenous peoples in Canada.

"It's also really important to think about Indigenous worldview and come to actually know the Indigenous communities that we have in Canada," he adds. "Understanding these perspectives and applying them is important in addressing the challenges we face today, in terms of developing sustainable practices, preserving the planet's biodiversity and ultimately, creating a healthy and sustainable future."