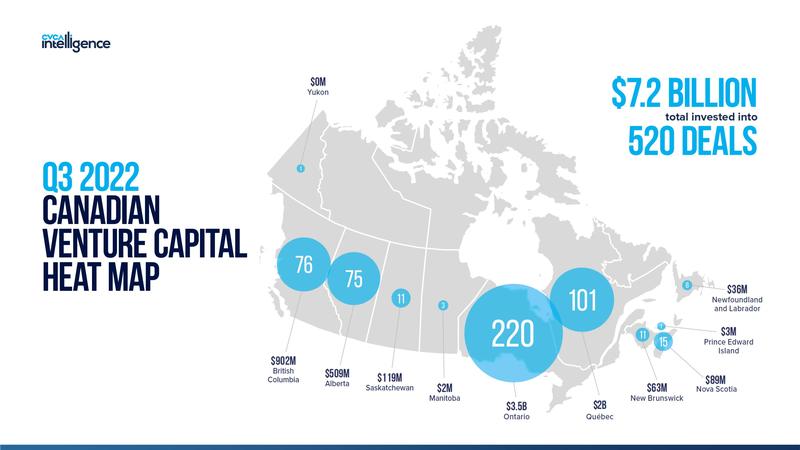 There were 76 new venture capital financings completed in British Columbia YTD as of the 3rd quarter ending September 30, 2022, totallling almost a billion dollars in new VC investments commmitted to BC tech companies ($902 million).

There were also an additional 88 private equity financings completed in BC YTD as of the 3rd quarter, for an additional $197 million in investment.

There were a further 23 non-dilutive 'venture debt' financings totalling $46 million completed in BC so far this year as of Sept 30th (which has already exceeded the record totals for all of 2021).

The CVCA reported in their report that venture capital activity nationally has slowed but remains above historical averages.

There have been 520 venture capital financing deals completed across Canada YTD as of the 3rd quarter, which is already near the full year levels achieved in 2018-2020 (521, 556, 496), but tracking a bit below than the historic record setting pace achieved last year (when 786 deals were completed).

The new VC investments in 2022 however appear to also be skewing a bit more towards earlier stage deals (88% of all transactions), and smaller funding amounts (averaging $6.2 million for VC deals, and $10.5 million for PE deals in Q3).

Attached below are some of the key findings reported by the CVCA in their 3rd quarter 2022 report. 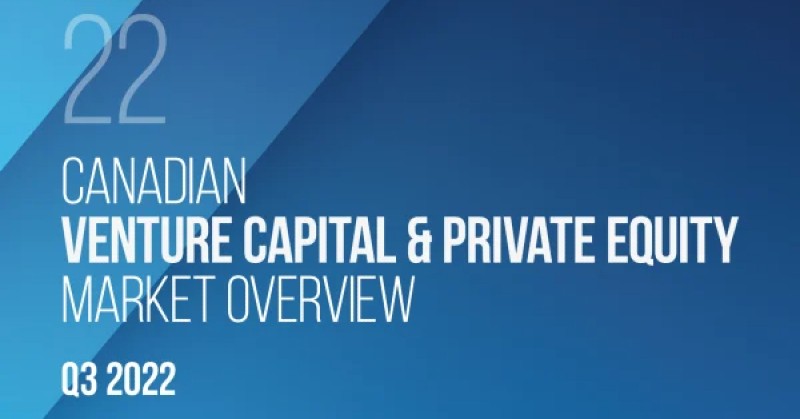 CAD $896M of venture capital dollars were invested across 144 deals in the third quarter, bringing the year-to-date (YTD) total to $7.2B invested across 520 deals as VC investment continues to normalize to pre-pandemic levels. While there was a quarter-over-quarter (QoQ) decline in investment value and deal count, investment in Q32022 is comparable to the same quarter in 2020 and with a higher deal count. 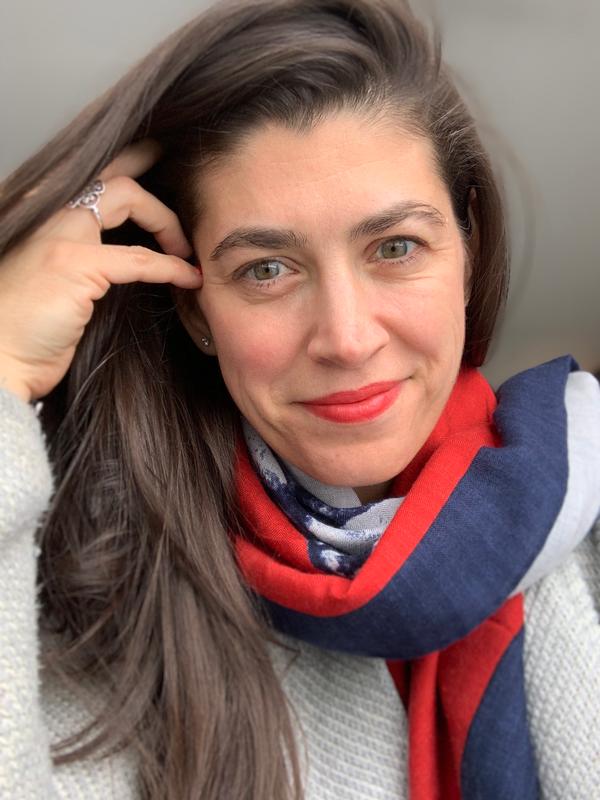 "Canada's VC activity is mirroring global trends, particularly that of the United States, in both deal count and in a similar drop in investment size, as investors continue to monitor market conditions and founders hold off on fundraising," said Kim Furlong, Chief Executive Officer, CVCA. "Q3 shows two positive trends, first an uninterrupted growth at the seed stage and second, a higher than historical average allocation to cleantech."

Investment into early and seed-stage companies demonstrated the most resilience this quarter, comprising 45% and 43% of all transactions respectively. There was CAD $152M invested at the seed stage across 62 deals, bringing the YTD total to CAD $630M, nearly double 2020 levels and on pace to match 2021's record by year end.

The information, communications, and technology (ICT) sector continued to lead for investment, accounting for over half of all VC deals YTD, with CAD $4.5B invested across 271 deals. The life sciences vertical closed 16% of all deals so far this year at 82, accounting for 12% of all deal value. Investment into cleantech surpassed 2020 levels with CAD $459M invested across 36 deals. Institutional and government net-zero targets are driving investments in the cleantech space. 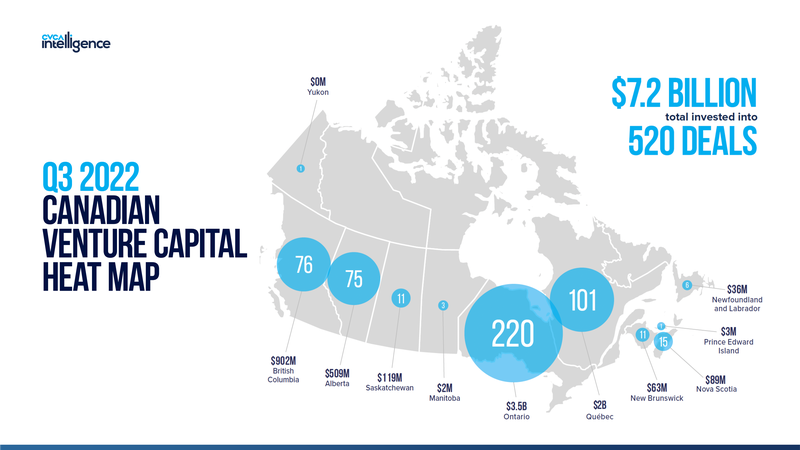 PE deal count is up by 9% YTD from the same period last year, already surpassing 2021's total annual deal count while 86% of all disclosed PE transactions were under CAD $25M. There is an absence of larger PE deals so far this year which has led to the marked decline in overall PE deal value with only one $500M+ deal closing earlier this year. The largest disclosed deal this year was the private placement of common shares by Caisse de dépôt et placement du Québec & the Canada Pension Plan Investment Board into Quebec-based WSP Global for CAD $460M.

Exit activity through mergers and acquisitions (M&A) is outpacing the 5-year average in number of transactions by 19% while trailing behind in total value by 48%. Meanwhile, there have been no initial public offerings (IPOs) so far in 2022 as companies continue to stay private given increased public market volatility. 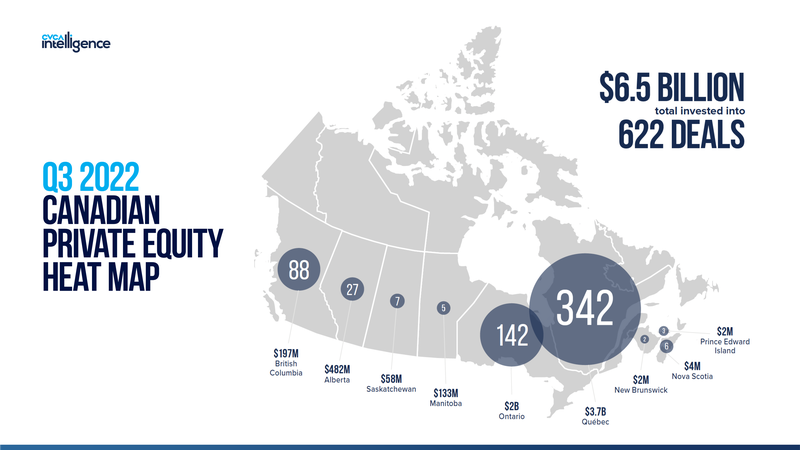 About the Canadian Venture Capital and Private Equity Association (CVCA)

As the voice of Canada's private capital industry, the Canadian Venture Capital and Private Equity Association (CVCA) works with the investors behind some of the biggest innovations fuelling the Canadian economy.

The CVCA is proud of its track record of delivering value to its members. With this support, our members excel at driving economic growth, creating jobs, and fostering healthy communities.

Historical information provided by CVCA is subject to change. Every effort has been made to provide information that is current and accurate. Nevertheless, inadvertent errors in information may occur. The information contained through CVCA quarterly market reporting and CVCA Intelligence has been made available by public sources and third parties, subject to continuous change without notice, and therefore, is not warranted as to its merchantability, completeness, accuracy, or up-to-datedness. Any reference to specific investments or investors is for appropriate acknowledgment and does not constitute sponsorship or endorsement.