Burnaby, BC, November 25, 2022--(T-Net)--A team of Simon Fraser University researchers is preparing for blast off after being announced as a major partner in Canada's first moon rover mission.

For the first time in history, a Canadian rover will explore the moon and help in the international search for water ice, a key component needed for the future of human space exploration.

Simon Fraser University was named one of the mission's partners earlier this month when the Canadian Space Agency announced that Canadensys Aerospace Corporation has been selected to build the lunar rover. 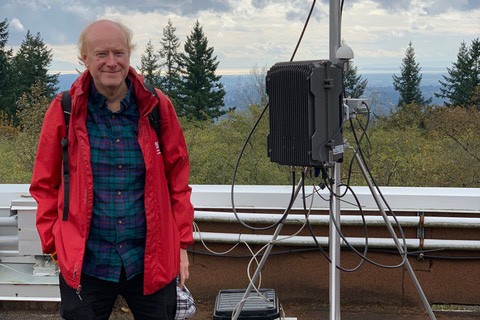 Stephen Braham, who leads SFU's renowned PolyLAB for Advanced Collaborative Networking, says his team will be providing world-leading expertise for the mission's surface wireless network, communications via lunar orbit and direct communication to and from Earth.

"We will be supporting the design of communications of the rover, including the network protocols used," says Braham. "But our biggest interest for this mission is to understand how wireless networks behave on the moon, as we already know it has one of the most unique radio propagation environments in the solar system."

Braham says most wireless network planning tools used on Earth will not work well in the polar regions of the moon, where the Canadian rover and eventually humans will be sent.

"These are not the regions that we sent the Apollo missions to," says Braham. "We are hoping that this rover will help us learn enough to build the networks we need for permanent lunar habitation."

SFU's role on the mission is the culmination of decades of work building mission-critical wireless networks and testing concepts for wireless networks for the moon and Mars, according to associate professor Peter Anderson, School of Communication, who directs the SFU Telematics Research Laboratory that includes PolyLAB.

They have a long history of working on communication studies and analogue systems for NASA and the Canadian Space Agency.

This includes extensive research on predecessors to cellular and modern Wi-Fi networks in the Canadian High Arctic at the Haughton-Mars Project with the SETI and Mars Institutes, dating back to 1999, which now informs the technologies being applied to the Canadian rover project.


The team at SFU has also been entrusted with testing LTE cellular networks and developing cellular service and Wi-Fi standards for future space missions.

"It's been an incredible journey, beginning with theoretical concepts and simulations to now preparing for actual implementation," says Anderson.

The NASA-led international Artemis Program to return humans to the moon permanently got off to a successful start with the success launch of the Orion spacecraft Nov. 15.

The Canadian rover is currently slated to launch as early as 2026.