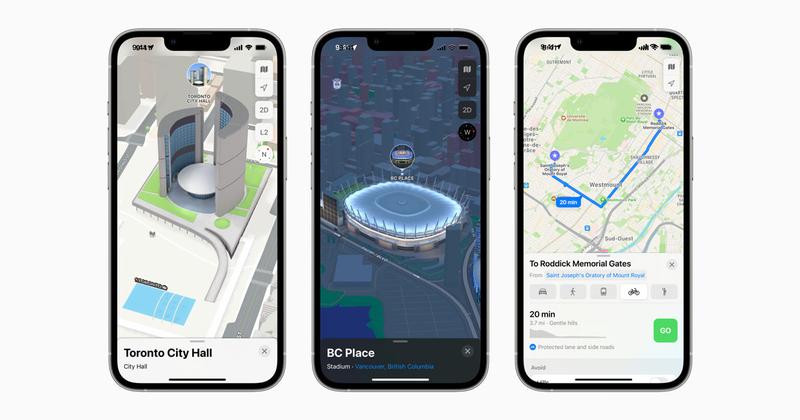 The newly enhanced city experience — which expands on the new map that Apple says it spent years building from the ground up — includes enhanced navigation and amazing details for road markings, land cover, trees, elevation, and public transit routes; introduces a new windshield view for drivers and immersive walking directions shown in augmented reality; and much more.

"We're excited for Apple Maps users to explore the beauty and culture of Montreal, Toronto, and Vancouver in an incredibly detailed new way," said Eddy Cue, Apple's senior vice president of Services. "Built with privacy at its core, this update is the continuation of our commitment to building the best, most accurate map of the world — with a beautifully designed experience and attention to detail that only Apple can deliver."

In Maps, users can see elevation details across a city, new road details, and custom-designed landmarks such as the Notre-Dame Basilica in Montreal, and Robson Square in Vancouver.

A nighttime mode with a moonlit glow activates at dusk. In addition to Vancouver, Montreal, and Toronto, the new Maps experience is also available in world-class cities around the world, including London, Los Angeles, New York, Philadelphia, San Diego, San Francisco, and Washington, D.C. 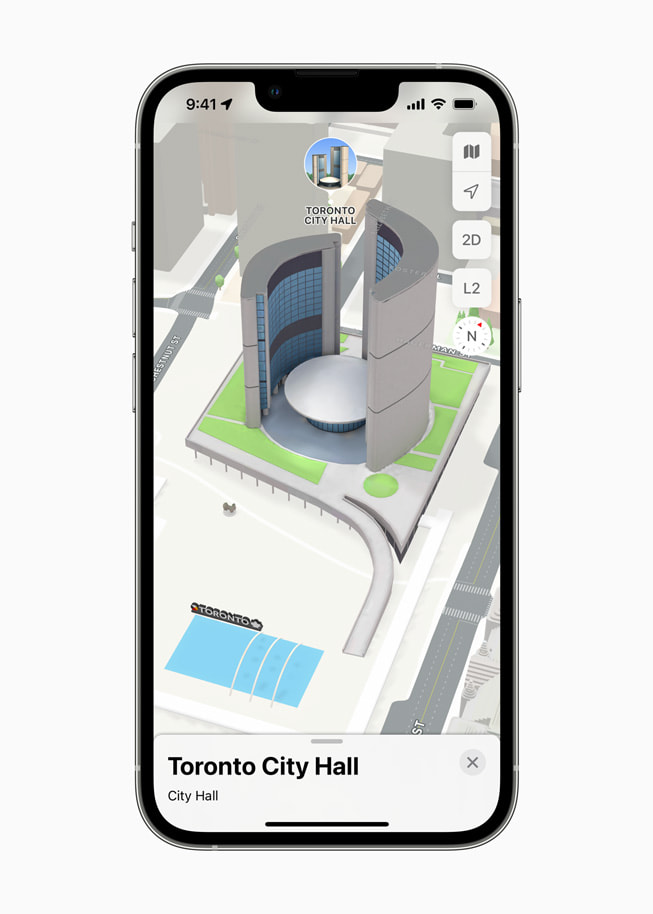 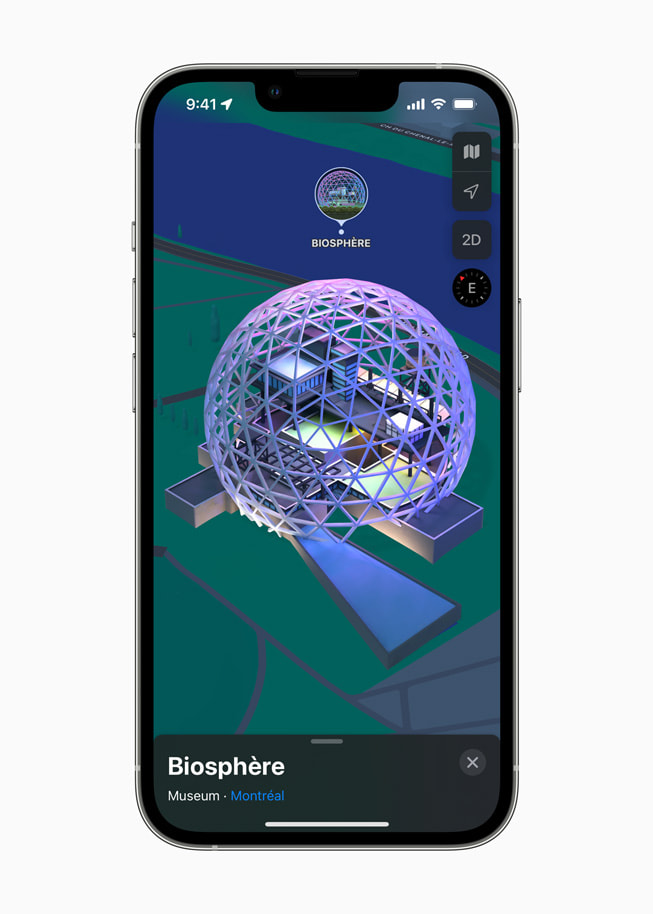 Maps offers improvements for public transit riders with an updated transit map. Nearby stations are prominently displayed at the top of the screen, and users can pin their favourite lines in Maps so the best route is just one tap away. Once a transit route is selected, Maps will automatically notify the user when it is time to disembark as they approach their final destination, and riders can even keep track on Apple Watch. These updates build on transit features already available in Maps, including real-time transit, which provides detailed transit schedules, live departure times, arrival times, the current location of a bus or train en route, and system connections to help plan a journey. Maps also includes important real-time information like outages.

With iOS 15, Maps introduces step-by-step walking guidance in augmented reality. Users can simply raise their iPhone to scan buildings in the area, and Maps generates a highly accurate position to deliver detailed directions that can be viewed in the context of the real world. Augmented reality guidance is currently available in London, Los Angeles, New York, Philadelphia, San Diego, San Francisco Bay Area, and Washington, D.C.

Maps also makes it easy to discover the many things to see and do in cities around the world through curated Guides created by a selection of trusted resources. In iOS 15, users can tap the Explore Guides button in Maps to access over two thousand expertly curated guides that include recommendations from respected Canadian brands such as Toronto Life and Narcity, to global brands like Lonely Planet.

Curated Guides can be saved, and they are automatically updated when new places are added, so users always have the latest recommendations. Users can even create their own personal Guides of favourite places to share with friends and family. 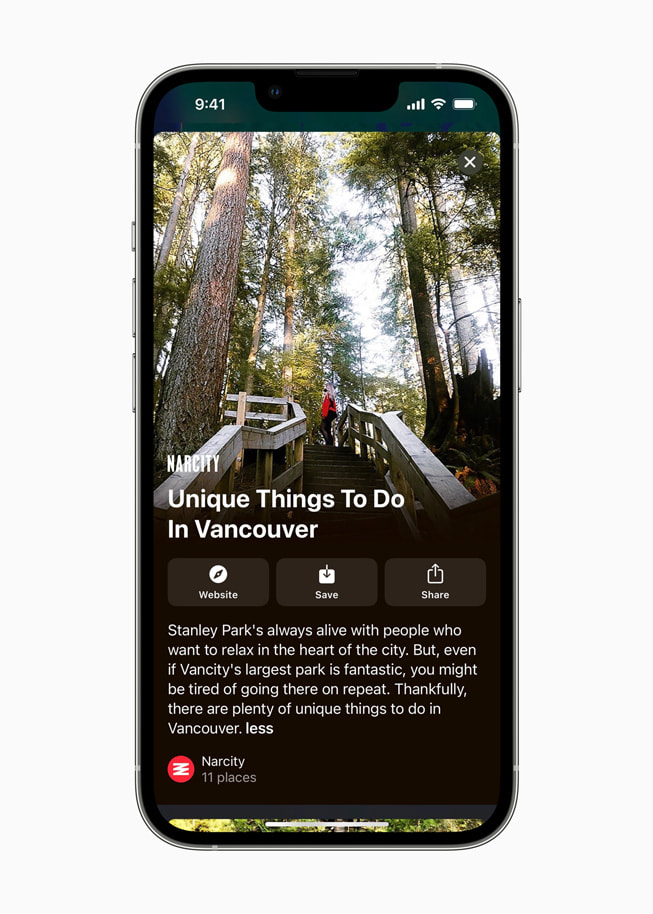 Guides make it easy to discover great new things to do in a city, plus find the best places to eat, shop, or meet up with friends.

In iOS 15, Maps offers a rich and interactive three-dimensional globe that introduces a whole new way of looking at the world. The globe shows Earth's natural beauty with amazing textures and contours. Users can see vibrant details of mountain ranges, deserts, rainforests, oceans, and more. Now even the most remote and precious locations on the planet can be explored right from iPhone.

Now available for Montreal, cycling directions show the elevation for a ride, how busy a street is, and whether there are stairs along a route. With voice guidance and Haptic Touch on Apple Watch, users can stay even more focused on the path ahead while enjoying their ride. 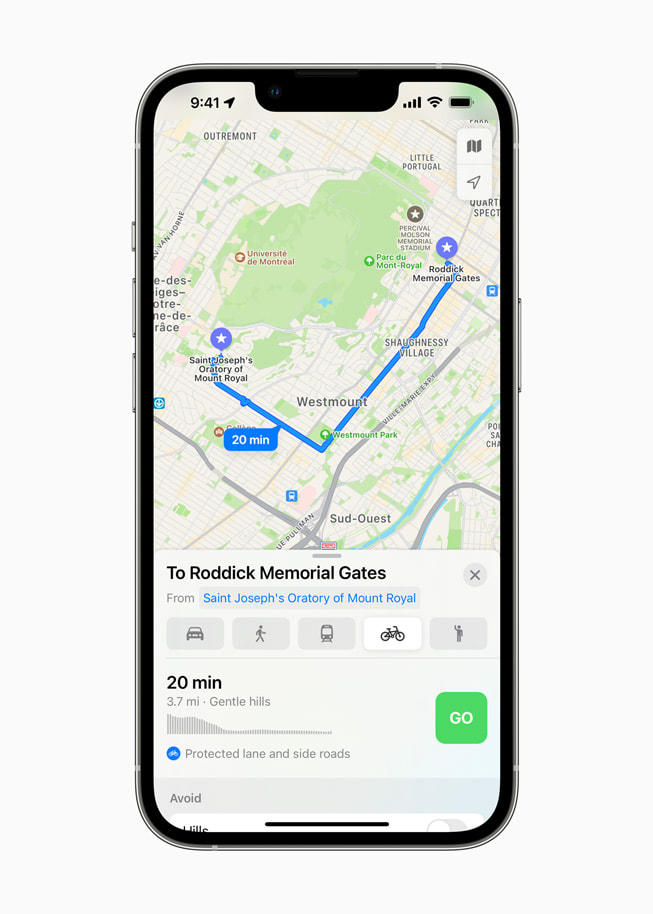 Cycling directions make it easy to ride from one landmark to another, noting all possible terrains along your route. In addition to the new updates available in iOS 15, Maps offers many other useful features:

Apple says it is committed to keeping personal information safe and has built privacy into the core of Maps. With Maps, no sign-in is required. Personalized features, such as suggesting departure time to make the next appointment, are created using on-device intelligence. Any data collected by Maps while using the app, including search terms, navigation routing, and traffic information, is associated with random identifiers that regularly reset to prevent connecting search and location data stored on the server to a unique user. Maps goes even further to obscure a user's location on Apple servers when searching for a location through a process called "fuzzing." Maps converts the precise location where the search originated to a less-exact one within 24 hours.