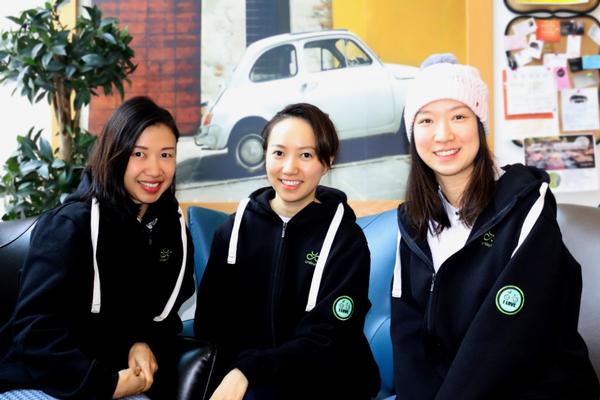 After graduating, Min started a successful career as an entrepreneur, founding three businesses in the international trade, property and travel sectors. Combining her entrepreneurial talents with a passion for cycling, Min sees U-bicycle as the perfect mix of business and making a positive impact.

"I grew up in Shanghai and in my childhood I really liked bicycles. I had some great, memorable moments with family and friends riding bicycles," says Min. "But my husband and some friends suffered from lung diseases. It was very common because of the air pollution in China at that time."

When she arrived in Canada to study at SFU, she was struck by the blue skies, clean air and cycling infrastructure, and immediately saw the opportunity to promote cycling to help maintain the air quality and reduce carbon emissions and traffic congestion.

Angel Fu, a close family friend of Min's, was flying high in the world of finance as an executive director at Goldman Sachs in Hong Kong. She left this job to join the U-bicycle team, inspired by the idea of giving something back to the community. To complete the leadership team, the two were joined by Mandy Chan, who draws on seven years' experience in marketing and advertising at Microsoft.

U-bicycle launched its service in Victoria, B.C. in October 2017 and now operates 450 bicycles in the provincial capital. It is now looking to grow, both in Victoria and its surrounding areas and in Metro Vancouver, and the leadership team is talking with several municipalities. As former SFU students, the team also hopes to see U-bicycle operating at SFU's Vancouver campus.

With 20 employees in North America and eight further crew members soon to be hired to support planned expansion, U-bicycle is growing fast. To promote local employment opportunities, the company is committed to hiring local talent and partnering with businesses in its areas of operation.

The station-less system means that users need not pick up or drop off bikes at specified locations. Instead, they can search for a nearby bike, unlock it using a smartphone app, and then lock it up again when they reach their destination—wherever that is. The convenience of this system, which also eliminates expensive infrastructure and lost parking spaces and revenues, makes it attractive to municipal governments.

U-bicycle's smart bikes are specifically designed for B.C. users, and the company's close relationship with the bike's manufacturers allows them to customize the bikes and make improvements quickly. They have already launched a second generation of bikes incorporating improvements based on feedback from users, including improved fenders, lighter weight and an increased range of seat heights.

Making a positive impact for the future

The business is going from strength to strength but, for Min, the venture's success is about far more than the number of bikes on the road. She is proud of the impact the business will have on her community and of its positive impact for the next generation.

"I can happily say that, when I look at my four-year-old son Rick running around and zipping around on his bike, I am extremely proud of the life and example I am setting for him," she says. "With U-bicycle I hope he can, in turn, teach others how to reduce our carbon footprint, not just for ourselves but for the generations to come."